This is not the “official” shortlist from the Shadow Jury with whom I am privileged to read. We plan to reveal what we, as a group, think should be on the short list for the Booker International Prize 2020 on April 10. But, as the official list from the Booker Prize will be released tomorrow, I wanted to submit my six favorites from the thirteen books on the long list.

My very favorite was The Other Name, a quietly contemplative book with which I felt a great compassion and identity. Next, comes The Enlightenment of The Greengage Tree for its incredible power to make magical realism effective in relaying the horrors of the revolution in Iran. Then, comes The Memory Police because it has made me think about the power of memory and loss. After that is Little Eyes for its ability to explore the encroachment of technology in our lives (although, I must say that technology has certainly been a boon during this time of isolation!). The Eighth Life is included because it portrays a family’s story with great poignancy. Finally, Hurricane Season must be considered because it is written with such raw ugliness that I cannot forget it, and it has shown me what a safe life I have been privileged to live.

I am eager to see what the list from the Booker Prize will include, as it is revealed tomorrow, April 2, 2020.

The first duty of the Memory Police was to enforce the disappearances.
(p. 14)

How ironic that the very next book I pick up after The Enlightenment of the Greengage Tree should also be about terror. Force. Loss.

Things disappear, like emeralds and perfume bottles, ferry boats and families. People who are able to still remember are taken away by the Memory Police, never to be seen again. And so, some of them go into hiding.

Though the cold weather had not yet set in, they each wore several layers of shirts, an overcoat each, and mufflers and scarves wrapped around their necks. They held bags and suitcases that were obviously stuffed full. It seemed they had been trying to bring with them as many useful items as they were able to carry. (p. 21)

I am reminded of reading The Diary of a Young Girl, and Anne Frank’s description of wearing as many clothes as they could before they went into hiding. Although The Memory Police is a work of fiction, it closely resembles the power of a government gone wrong to me.

The island is run by men who are determined to see things disappear. (p. 25)

While it is never quite clear exactly why things disappear from the people, or where it is that these things go, what is made evident is the fear and the loss in their aftermath. One of the patterns that I kept noticing is how Ogawa drew a connection between “memory” and “heart.”

Memories are a lot tougher than you might think. Just like the hearts that hold them. (p. 109)

Maybe there’s a place out there where people whose hearts aren’t empty can keep on living. (p. 117)

The music continue to play, before the disappearance and after. It plays on faithfully, as long as the key is wound. That’s its role, now and forever. The only thing that’s different is the hearts of those who once heard it. (p. 147)

‘There, behind your heartbeat, have you stored up all my lost memories?’ I thought this to myself, cheek pressed against R.’s chest. (p. 158)

I will be thinking about this novel for a long time, considering the impact of loss on our lives; the impact of loss on our hearts. Ogawa raises so many questions, I think, more than she gives us answers. Where do the things which have disappeared go? Do we eventually become accustomed to what we have lost, and not experience the pain as acutely as we did at first? What are we, if we have no memories? And, ultimately, isn’t loss inevitable?

In a beautifully written book, I am struck by this thought towards the end: “But I suppose the order of the disappearances made no real difference – if in the end everything disappeared anyway.” (p. 271)

There is no avoiding loss. There is only deciding on how it is that we will handle our memories.

About the author: Yoko Ogawa has won every major Japanese literary award. Her fiction has appeared in The New Yorker, A Public Space, and Zoetrope: All-Story. Her works include The Diving Pool, a collection of three novellas; The Housekeeper and the Professor; Hotel Iris; and Revenge. She lives in Tokyo.

The Memory Police was translated from the Japanese by Stephen Snyder.

Find a fascinating review of this book from Tom at Wuthering Expections. 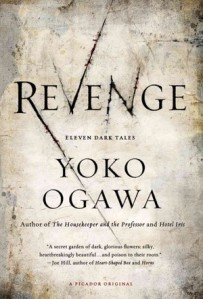 Yoko Ogawa’s book, Revenge, is a collection of ‘eleven dark tales’. They are so dark, in fact, that halfway through I abandoned the book. There was no point, I felt, in immersing myself so completely in stories which dealt with the bizarre, the grotesque, or inevitable death. More troubling than the darkness was the accompanying sorrow for, to me, each story had an oppressive kind of grief underlying it.  Here is a section from the first story:

Afternoon at the Bakery

The door that would not open no matter how hard you pushed, no matter how long you pounded on it. The screams no one heard. Darkness, hunger, pain. Slow suffocation. One day it occurred to me that I needed to experience the same suffering he (my son) had.

First, I turned off our refrigerator and emptied it: last night’s potato salad, ham, eggs, cabbage, cucumbers, wilted spinach, yogurt, some cans of beer, pork–I pulled everything out and threw it aside. The ketchup spilled, eggs broke, ice cream melted. But the refrigerator was empty now, so I took a deep breath, curled myself into a ball, and slowly worked my way inside.

As the door closed, all light vanished. I could no longer tell whether my eyes were open or shut, and I realized that it made no difference in here. The walls of the refrigerator were still cool. Where does death come from?

This collection of short stories is quite different from Ogawa’s book The Housekeeper and The Professor, which I loved for its gentle portrayal of an unconventional family. Yet I suppose the bridge was built from that novel to this collection with her novel Hotel Iris. I wonder if this is where Ogawa’s writing will continue to take us, deep within the dark and horrifying. The stuff that in small quantities effectively chills our spine, but in greater doses induces despair.

“It occurred to me that I was crying because I wanted to see the translator. I wanted to feel the warmth of his skin, see the shy smile that lit up his face when he caught sight of me in the crowd. I wanted to repeat our secret ceremony at his home on the island. Though I knew I would see him the next day, that was somehow no comfort as I cried behind the desk. I wanted to see him that instant, and the feeling made me terribly sad.” (p. 73)

My relationship with Hotel Iris began a year ago when it was first released in English. I was promised an early edition by one of the agents in the publishing house, but it never appeared. Saddened, I determined to wait until I could order it myself.

Then, Mark David of Absorbed in Words sent me his own copy from the Philippines. I have been saving it for a special time, and this is it: the last weekend of my Summer before I return to the classroom.

I love the way Japanese novels, the particularly outstanding ones, create a mood. Every detail is portrayed simply and elegantly, and I feel as if I’m living with the characters in their own setting. I feel as if I’m there, although I’ve never personally been to Japan.

“We were standing on the deck of the excursion boat, looking out at the sea. The crowd that had pressed against the railing until so recently was nowhere to be seen. A nurse from the sanitarium who had apparently been shopping in town was sleeping against the window in the cabin. The man who ran the coffee stand had left his post and was smoking a cigarette at the bow of the boat. The deck was empty except for a few groups of tourists out to escape the monotony of the town.” (p. 142)

But Hotel Iris is not about tourists, or excursion boats, or monotony.

It is about a seventeen year old girl, the daughter of the hotel’s proprietress, and her relationship with ‘the translator’. The translator, for that’s all we know him as, first sees her when a whore kicks him out of their room in the hotel. Mari knows she must have him give her orders such as she heard him give the old prostitute, and their union is inevitable.

Much like Nabokov’s Lolita, we are in turns pitying her and captivated by her story. Here is a man fifty years older than she, who subjects her to horrors beyond my imagination: ordering her to put his socks on his feet without using her hands (only her mouth); tying her to furniture with cords which bind her; being rough and cruel one minute, while telling her he loves her the next.

In this bizarre tale, Ogawa explores relationships between mother and daughter, uncle and nephew, and most intriguingly, lovers with strange and unmet needs.

Find other views here:
In Spring It Is The Dawn
Bibliophile By The Sea
Vishy’s Blog
Paperback Reader
Bibliographing
Bibliojunkie

Title: The Housekeeper and The Professor
Author: Yoko Ogawa
Publisher: Picador, 2009 (for English translation)
Number of pages: 180
Rating: 4.5 out of 5

How is family defined? Certainly not in the tradition of Dick and Jane stories that were in all of my 1960’s Readers for elementary school: mom at home, father returning from work with his hat, every one cheerfully greeting him to a clean home and prepared dinner.  That would be nice, I suppose, if such a world existed. But, rarely can we define it as such.

I love how Ogawa pictures family in this book: a professor who only has 80 minutes of short term memory before he lapses back into forgetfulness; a housekeeper who is a single mother; her son, a boy nicknamed Root by the professor because the flat top of his head reminds the professor of a square root sign.

The professor resembles a sort of Ray Raynor: he clips notes to his suit, which he has written during his lucid moments, in order to remind himself of what has transpired in his life. Every day when the housekeeper comes to his door, he points to a drawing of her clipped on his suit to remind himself who she is.

We are able to live with this family for a short time, as Ogawa tells us of their simple lives; those that are filled with beauty and heartache, but above all, love for one another.