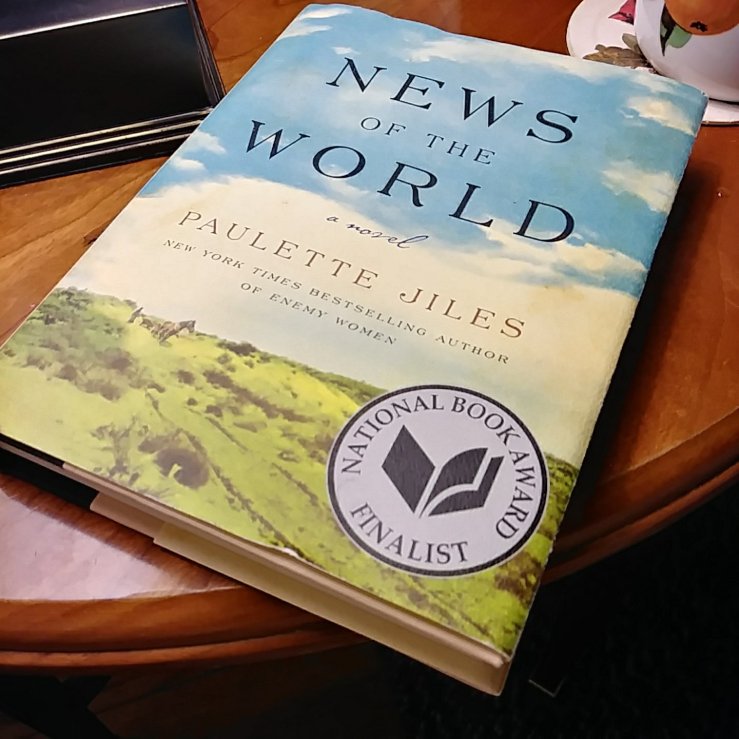 In the midst of one of the most bewildering beginnings I have read, and reread out of confusion, are absolutely gorgeous sentences that made me pause:

“…now the news of the world ages him more than time itself.”

“He had become impatient of trouble and other people’s emotions.”

“If people had true knowledge of the world perhaps they would not take up arms and so perhaps he could be an aggregator of information from distant places and then the world would be a more peaceful place. He had been perfectly serious. That illusion had lasted from age forty-nine to age sixty-five.”

Soon I have made enough sense of the story to figure out that Johanna, who was captured at the age of six by a Kiowa tribe, is being returned to her aunt and uncle who live near San Antonio by Captain Kidd. Apparently, the man who had originally agreed to the job is not capable of fulfilling it.

She is a feral child, if that is what means to be unable to bear shoes, and tightly cinched dresses, and the abolishment of every adornment (including a dress with elk teeth) she had previously worn.

Torn from her parents, adopted by a strange culture, given new parents, then sold for a few blankets and some old silverware, now sent to stranger after stranger, crushed into peculiar clothing, surrounded by people of an unknown language and an unknown culture, only ten years old, and now she could not even eat her food without having to use outlandish instruments.

Halfway through the novel I know the Captain cares too much about this German girl, who lives and acts like the Kiowa with whom she has lived. We sense that his own two daughters are weak and simpering; in contrast, he seems to admire the strength and ferocity of ten year old Johanna. He feels great compassion for her situation, stolen from her German parents who had been brutally murdered, and then her Kiowa parents; now she is floundering and lost. She is one of those children, as Doris Dillon (a character in the novel) says, “is forever falling.” They both know he is her protection in an unpredictable world.

Yet, he is compelled to make their way through great travail back to her family, and we sense the bond between them growing ever stronger. A man of seventy-two, who reads the news for ten cents apiece from those who want to hear it, has become the grandfather of a girl who once lived with the Kiowa.
They make a strange pair, but who is to say what forms a family? Quite possibly the definition lies in an emotional bond which cannot be severed. Certainly it is not simply the blood which flows through our veins.

I feel that Paulette Jiles wants to make the case for the estrangement of children who had been kidnapped by the Native Americans, that somehow those children always want to return to that life instead of the “civilized” European life. But, for me the issue is more about the relationship formed by Captain Kidd in his attachment to this child. And, her attachment to him.