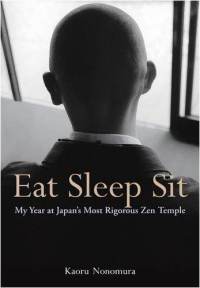 “Before coming to Eiheiji, I envisioned a life so hushed that you could hear ash falling from a stick of burning incense, with endless days of suspended motion and silent introspection. The reality was vastly different. Soon after arriving, I realized that the life of an Eiheiji trainee was a never-ending succession of loud, angry tongue-lashings and beatings-a world away from my fond imaginings. No where was the difference between imagination and reality more striking than in the kitchen.” ( p. 151)

Being a Christian, and a Western one at that, I had no idea what living a life in a Zen temple would be like. Neither, it seems, did Kaoru Nonomura, before he found himself inside one.
Eat Sleep Sit tells of his year at Japan’s most revered training monastery, Eihiji. Even the most basic parts of life become imbued with discipline, and therefore, meaning. But, they don’t come easily.
“When you passed a senior in the corridor, failure to join the palms in respect was punished on the spot with a blow. There were exhaustive rules for eating, walking, sitting, speaking, and every other human activity, and the slightest deviation from them met with intense physical reprisal.” (p. 80)
Every aspect of life in the monastery must be lived in a precise way. Eating, sleeping, and sitting have rules which must be taught, and followed perfectly. It is the job of senior monks to teach the trainees, and in many ways, their methods reminded me of the harshness used in our American military. There is no room for error, or for pride; one must simply learn the correct procedure and do it.
There are at least three pages on the correct way to eat. Some of the rules are these:
“Do not eat from the center of the bowl. Do not seek extra vegetables or rice unless you are ill. Do not cover up the vegetables with rice in order to obtain more. Do not look into your neighbor’s bowls or compare portion sizes.
Pour all your physical and mental strength in the act of eating. Do not roll the rice into a big ball. Do not fill your mouth with a large amount of rice at once. Do not eat spilled grains of rice. Do not chew noisily. Do not slurp. Do not lick anything.” (p. 99)
If so much attention is given to eating, there is even more so on the proper ways to eliminate. Which I won’t go into here.
This book is a fascinating look at what it means to live the disciplined life of a Zen monk. Much of the meaning, it appears to me, is brought on through the routine and self denial that is taught.
But, I was deeply moved at the end of the book where Kaoru Nonomura reflects on all that he has learned during his year long stay at Eiheji:
“By contemplating life as it is, stripped of all extraneous added value, I found I could let go of a myriad of things that had been gnawing at my mind. Through the prosaic repetition of Eiheji’s exacting daily routines for washing the face, eating, defecating, and sleeping, this is the answer that I felt in my bones: accept unconditionally the fact of your life and treasure each moment of each day.” (p.203)
Acceptance is a discipline I’m still practicing daily. There are few things more important than that, when for so long, I thought it was fighting to change what we can’t really control in the first place.
Rating: 4 out of 5
"I'm a very ordinary human being; I just happen to like reading books." ~Haruki Murakami (1Q84)