I have spent the past few days secluded in my house because of “the wet”. The rain in Illinois is relentless, keeping me from swimming at Centennial Beach, or riding my Cannondale down the prairie path next to the river. It is understandable how the weather can drive people to distraction; the drought in The Dry, set in fictional Kiewarra in Australia, presents as a character itself. You can feel the heat pressing down on you from every page, as well as the despair which accompanies it.

These two lines repeat throughout the book, drawing me in, as I want to know what Luke and his friend, Aaron Falk, lied about. Luke can never tell, because he has been found killed, along with his wife and young son, in the very first pages. It is assumed, at first, that Luke took his life after killing his wife and son. But, why would he leave baby Charlotte crying in her crib? Why were the cartridges Remington, and not Winchester as Luke’s gun used?  Too many things point to the possibility that Luke did not, after all, commit the murders everyone in the town believes he has.

Aaron has come to the funeral in his former town at the insistence of Luke’s father, and he stays to uncover the murders of Luke and his family. It seems that each person in Keiwarra has a heavy load. For one thing, there is no money. The drought is killing the crops, killing the income, killing the hope and incentive in an already small and struggling town. Some of the people have turned to alcohol, or gambling; others are simply existing. But, most of them aren’t without suspicion. For there is another murder, of teenaged Luke, Aaron, and Gretchen’s friend, which is also shrouded in blame.

Aaron and his father left Keiwarra twenty years ago, unable to bear the accusations that they had a hand in Ellie Deacon’s, drowning. Ellie lived with her abusive father, Mal Deacon, and her cousin, Grant, under increasing strain which her mother left for her to endure alone. But, when her body was pulled sodden from the dark water, the reasons for her death were never clear. We only know that neither Luke, nor Aaron, would turn from the alibi that they were together on the day she died.

Jane Harper took me through the town, the people, the murders, with such carefully crafted details that I never once felt manipulated. I never once questioned a loose thread; they weren’t to be found. Nor, did I suspect the turns the story would take near its conclusion. It is no wonder, then, that her book has the following recognition and awards:

2018 BRITISH BOOK AWARDS
Crime and Thriller
Book of the Year

(Thank you to my friend, Lesley, who brought it to my attention a few years ago.) 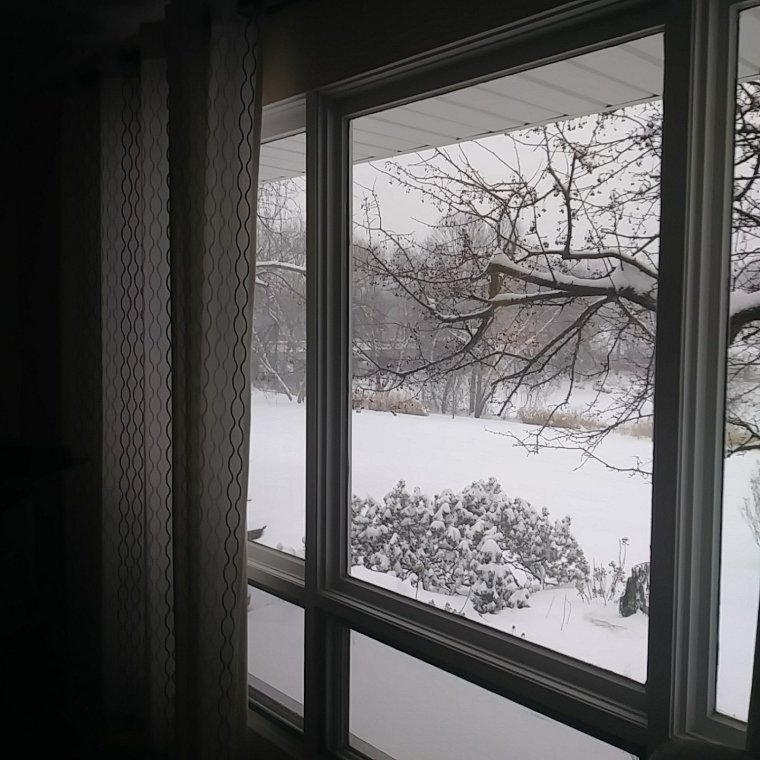 How lovely it is to sit by my window, leisurely, with my tea and time. There is a Snow Day today in Illinois, the first my third graders have ever had in their young school days. We have prepared our Valentine bags for next week, and folded origami hearts, so I am not worried about being behind. (Wink, wink.)

Nor am I worried about being behind in my reading. I am listening to The Dry by Jane Harper on the days that I do drive to work. It is a wonderful mystery recommended by Lesley, set in a farming community in Australia, read in by a native Australian, and I am caught up in the shootings of Luke, his wife and son, while the baby Charlotte lives. More interesting is the story of Luke’s friend, Aaron Falk, a policeman with a past. The narrator keeps saying, “Luke lied. You lied,” throughout the chapters…

And The Portrait of a Lady read-along is faring well. Arti of Ripple Effects has ready finished both The Portrait of a Lady and Mrs Osmond, a goal I’m trying to reach this month myself. JoAnn and Audrey are listening to the audio of Portrait, which I believe is also synced to their kindles, and Helen and I are steadfastly plugging along. Right now, I am aware that no one in Isabel’s family wants her to marry Osmand, but I don’t yet know why. Please feel free to read with us this month.

Finally, the shadow jury for the Man Booker International Prize is forming, and we are eagerly anticipating the release of the long list on March 12. The short list comes out April 12, and the winner will be announced May 22. Updates on our progress, and my reviews of the books, will soon appear here.

I hope your days are filled with snow, or at least the beauty and freshness it brings, and that you have plenty of time to enjoy whatever it is you are reading.