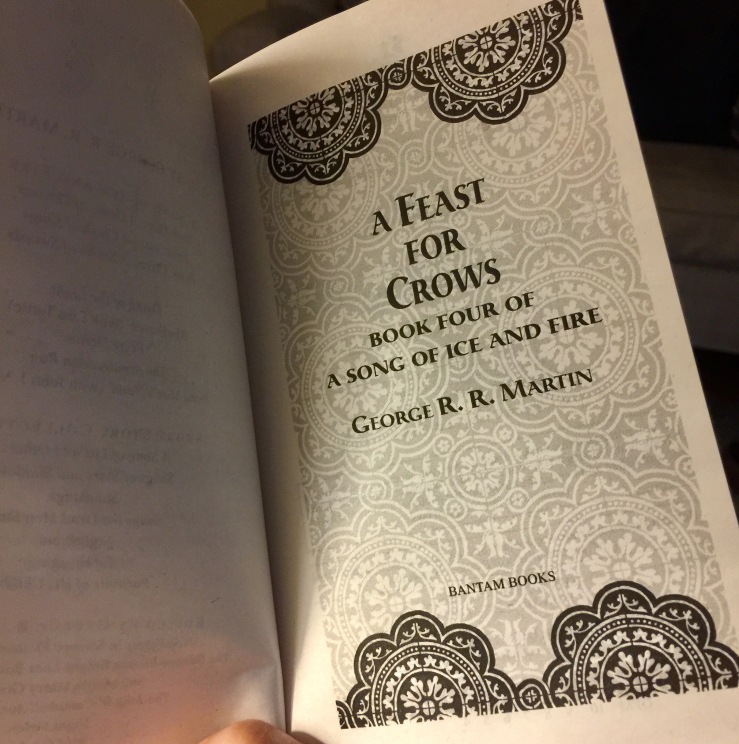 I have escaped a hot and airless classroom into a medieval world of great imagination. I am journeying with Brienne, and her entourage consisting of Nimble Dick and Podrick Payne, as they search for Sansa and Ser Dontas. Brienne’s sword is named Oathkeeper, and every bit of this story charms me as I read about them breaking their fasts on honey and bread, traveling through bogs and woods of pine, looking down on cliffs at a strange rider who follows them several miles behind.

I root silently for Tyrion Lannister, my personal favorite of all the characters, and don’t believe for a minute that he poisoned Joffrey at his wedding, nor killed his own father Lord Tywin after Jaime helped him escape from prison. People love to accuse the ugly or maimed.

I want to see Cersei smacked soundly; the opinions she holds of herself are far too self-righteous and manipulative for my liking.

I have turned away, temporarily, from the “heavier” reading of books in translation, or the meat of the classics, for a pure romp in high fantasy. I am fully enmeshed in George R. R. Martin’s A Song of Fire and Ice, and grateful for the escape it provides in tandem with the freedom of summer. I must read a little more slowly, for there’s only one book more: A Dance With Dragons.

Have you read any of the five books from A Song of Fire and Ice? Are you as mesmerized as I am with this tale?

” ‘When you play the game of thrones, you win or you die,’ she whispered.”

Title: A Game of Thrones
First in the series of A Song of Ice and Fire
Author: George R. R. Martin
Published August 6, 1996 by Bantam
Number of pages: 835 (US paperback)

Here is the first volume in George R. R. Martin’s magnificent cycle of novels that includes A Clash of Kings and A Storm of Swords. As a whole, this series comprises a genuine masterpiece of modern fantasy, bringing together the best the genre has to offer. Magic, mystery, intrigue, romance, and adventure fill these pages and transport us to a world unlike any we have ever experienced. Already hailed as a classic, George R. R. Martin’s stunning series is destined to stand as one of the great achievements of imaginative fiction. (Random House)

I normally wouldn’t have chosen it, myself. But, with Carl‘s Once Upon A Time III Challenge, and needing to escape from certain stresses in my life right now, I reached for something other worldly, and I’m so glad that I did.

But, it’s easy to want to slap self proclaimed King Joffrey, who’s killed Sansa’s father and brought her to see his head on a stake before their forced marriage. It’s easy to want to throw Joffrey’s mother, Queen Cersei, off some parapet because she’s the manipulation behind much of his decisions.

Those are only a few of my favorite characters. The book is so full of them, I’m sure you’ll find a few favorites of your own. When you do, let me know; we’ll have to discuss who should be King. Or, Queen.