When I was only about fifty pages into this book, I already knew I was holding something spectacular in my hands. I set the book down, searched for Daniel Brown’s site on my mini iPad, and did something I can’t remember doing before. I emailed the author a quick note about how impressed I was with his book.
Daniel,
Viking Press sent me a copy of The Boys in The Boat to review in my book blog, Dolce Bellezza. I am not finished with your book yet, but I had to put it down to email you about how incredible I think your book is. Rowing, as a topic, interested me not at all, and yet I am riveted to every page. Your writing is exquisite, and the story you tell of courage, determination, perseverance and teamwork is everything I believe necessary for a good life. I will write a review next week, but for now I want to say thank you for such a marvelous book. It moves me more than I can say.
Sincerely,
Bellezza
The next morning, he had emailed me back with these words:
Hi Bellezza,

So glad that you are enjoying The Boys in the Boat. I, too, had no particular interest in rowing before starting the project. The human interest element of the story was so compelling to me, though, that I dove right in and actually have become quite a fan of the sport.  In the end, though, as you say, and as I say at all my book talks, it’s really a story about the human heart more than about rowing.

Thanks in advance for the review….

And all best wishes.

The Boys in The Boat is a story of nine men on the University of Washington’s rowing team who went to the 1936 Olympics. It’s a story of the Depression years, the Dust Bowl, and the hard times similar to many communities today. It’s the story of Hitler and the perverse ideology with which he prevailed while leading Germany. It’s a story of George Pocock who built the rowing shells with extreme skill and care, the story of Al Ulbrickson the quiet but determined coach, and the boys whom he taught to become excellent rowers. The boys themselves are so inspiring, for rather than finding themselves defeated by their circumstances, they willed themselves to move beyond what could have been crippling discouragement.

“The boys in the Clipper had been winnowed down by punishing competition, and in the winnowing a kind of common character had issued forth: they were all skilled, they were all tough, they were all fircely determined, but they were all good-hearted. Every one of them had come from humble origins or been humbled by the ravages of the hard times in which they had grown up. Each in his own way, they had all learned that nothing could be taken for granted in life, that for all their strength and good looks and youth, forces were at work in the world that were greater than they. The challenges they had faced together had taught them humility – the need to subsume their individual egos for the sake of the boat as a whole – and humility was the common gateway through which they were able now to come together and begin to do what they had not been able to do before. ” (p. 241) 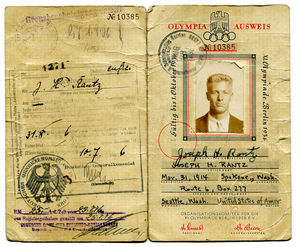 More than anything, to me, this is the story of Joe Rantz, a boy of incredible courage and tenacity, a boy who became so real I wanted to be his friend. His mother died when he was quite young; his step-mother failed to either appreciate or understand him. He was abandoned by his family when he was fifteen years old, and yet overcame such adversity that he made the U.S. Olympic team in 1936.

“Immediately after the race, even as he sat gasping for air in the Husky Clipper while it drifted down the Langer See beyond the finish line, an expansive sense of calm had enveloped him. In the last desperate few hundred meters of the race, in the searing pain and bewildering noise of that final furious sprint, there had come a singular moment when Joe realized with startling clairy that there was nothing more he could do to wint the race, beyond what he was already doing. Except for one thing. He could finally abandon all doubt, trust absolutely without reservation that he and the boy in front of him and the boys behind him would all do precisely what they needed to do at precisely the instant they needed to do it. He had known in that instant that there could be no hesitation, no shred of indecision. He had had no choice but to throw himself into each stroke as if he were throwing himself off of a cliff into the void, with unquestioned faith that the others would be there to save him from catching the whole weight of the shell on his blade. And he had done it. Over and over, forty-four times per minute, he had hurled himself blindly into his future, not just believing but knowing that the other boys would be there for him, all of them, moment by precious moment.” (p. 355)

Surely that may be why instead of calling his book something like The Eight-Oared Race, Daniel Brown entitled it The Boys In the Boat. It is the best book I have read all summer, a book I recommend with all my heart. It is inspiration, it is character, and it is victory over every kind of enemy that rears its ugly head in our faces.
Viking Press has offered a copy of this book to one U.S. reader. Please leave a comment to be considered for the give-away.