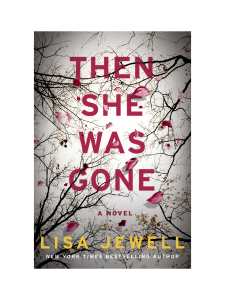 It is a guilty pleasure of mine to read thrillers, in between the novels of translated literature which I so adore. But, sometimes I long for something effortless to read. Something distracting. Something which is both an engaging plot and uncontrived.

Perhaps you’ve seen my scorn for Gone Girl. Or, The Girl on The Train. Things got a little better with The Woman in The Window. But, Then She Was Gone turned out to be pleasant surprise.

I began it this week while walking on the treadmill at the health club. I searched my phone for something distracting, something plot driven, and I downloaded this as an audio book. It was narrated, in a lovely British voice, by Helen Duff. And it told a story which I quickly had to read in text rather than listen to in audio, as I am a much better reader than listener.

When Ellie Mack, a brilliant student and lovely daughter, disappears from home no one finds her until her bones are discovered much, much later in a ditch. This is told fairly early on; I am not spoiling any surprises. The novel goes on to explain her story, which is a rather intricate plot involving her maths tutor, specifically, while simultaneously revealing the tender heart of her mother. I found it quite compelling, and I ended it just now oddly satiated at the outcome of a rather distressing story since it was told so compassionately and effectively.

This is one thriller that did not disappoint me. (And now I am off to read We and Me by Saskia de Coster for Boekenweek, which is March 23-31.)

6 thoughts on “Then She Was Gone by Lisa Jewell”