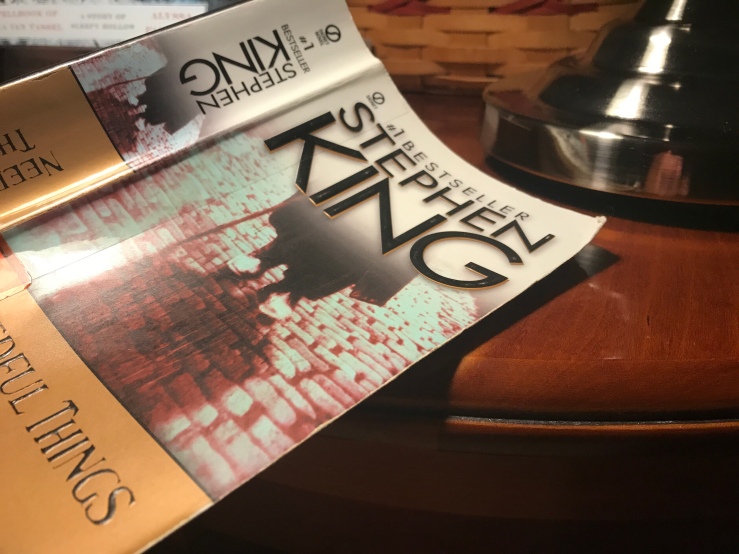 “The world is full of needy people who don’t understand that everything, everything, is for sale…if you’re willing to pay the price.” (p. 82)

Eleven year old Brian Rusk has bought a Stanley Koufax 1956 baseball card from the shop, Needful Things. He can’t stop looking at it, checking it, taking one last peek to see that it is still there. “He recognized that it had become kind of an obsession with him, but recognition did not put a stop to it.” Because obsessions are not that easy to get rid of.

Ask Danforth “Buster” Keeton, who is addicted to gambling and buys a tin race track which magically reveals the winning horse. Or, Hugh Priest who is addicted to alcohol and buys a fox tail which reminds him of the joy of his youth, or even timid Nettie Cobb, who simply cannot let the Carnival glass lampshade out of her sight. Each person in Castle Rock feels that the thing they have purchased at Needful Things is now the one thing they cannot live without; surely this thing, they hope, is the answer to their yearning.

I am captivated by the way that King has portrayed addiction in this novel:

It was a pit with greasy sides, a snare with hidden teeth, a loaded gun with the safety removed. (p. 210)

He had discovered another large fact about possessions and the peculiar psychological state they induce: the more one has to go through because of something one owns, the more one wants to keep that thing. (p. 261)

But, the people of Castle Rock, Maine, are holding nothing but empty promises. Brian’s brother, Sean, can’t understand why Brian is so attached to a faded, dog-eared card bearing the name Sonny Koberg. And no one can understand why Hugh Priest gently and lovingly strokes a mangy, dirty piece of fur which was once a lustrous fox tail. Deputy Norris Ridgewick’s beloved Bazun fishing rod is nothing but a splintery bamboo pole.

For the people have all been deceived, by their own desires to be sure. But, also by Leland Guant, owner of Needful Things, who sells them what they desire with soothing words (“Because the devil’s voice is sweet to hear”), a compelling gaze, and a promise to play a little prank, a harmful little trick.

The “little tricks” build to such grotesque consequences that soon the town begins to self destruct. Castle Rock’s inhabitants are in the grip of their obsessions, and they will let nothing come in between the thing and their illusion of happiness.

“Perhaps all the really special things I sell aren’t what they appear to be. Perhaps they are actually gray things with one remarkable property—the ability to take the shapes of those things which haunt the dreams of men and women.” He paused, then added thoughtfully, “Perhaps they are dreams themselves.” (p. 370)

The Enemy and all his empty promises are portrayed so cleverly in this novel by Stephen King, who shows us in thinly veiled hints just who Leland Gaunt may be:

“Needful Things is a poison place and Mr. Gaunt is a poison man. Only he’s really not a man, Sean. He’s not a man at all. Swear to me you’ll never buy any of the poison things Mr. Gaunt sells.” (p. 553)

I was riveted to this book, almost as much as The Stand, because I am fascinated by the way King writes, pulling me immediately into the story, and into the era I knew when I was growing up. I also like the battles between good and evil, most of which I find are not entirely fictionalized, but very real indeed.

There’s a warning in this book, told several times over. Even if Stephen King knows it, which I suspect he does, he didn’t write it as plainly as this:

Those who cling to worthless idols forfeit the grace that could be theirs. Jonah 2:8 (NIV)