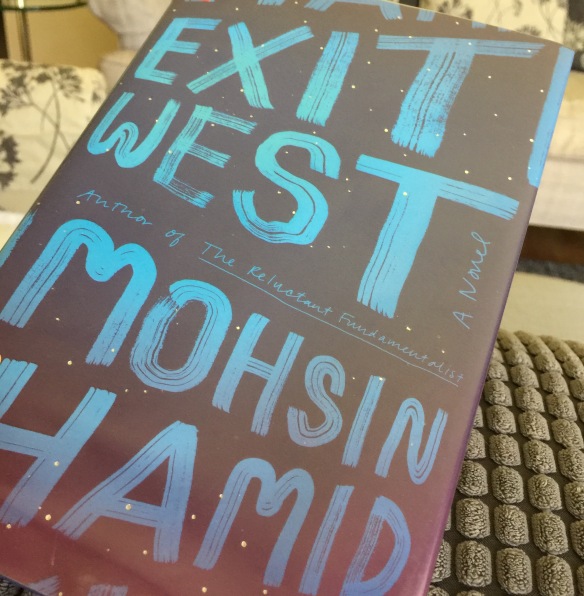 “In a city swollen by refugees but still mostly at peace, or at least not openly at war, a young man met a young woman in a classroom and did not speak to her. For many days. His name was Saeed and her name was Nadia and he had a beard, not a full beard, more a studiously maintained stubble, and she was always clad from the tops of her toes to the bottom of her jugular notch in a flowing black robe. Back then people continued to enjoy the luxury of wearing more or less what they wanted to wear, clothing and hair wise, within certain bounds of course, and so these choices meant something.”

These are the first three lines of this unusual book, and from the instant I read them I knew that I was going to read something pertinent.

Saeed and Nadia fall in love, of course, in their unnamed, war-torn town. When one day the signal to every mobile phone in the city vanished, internet activity was discontinued as well.

Nadia did not have a landline at home. Saeed’s landline had not worked in months. Deprived of portals to each other and to the world provided by their mobile phones, and confined to their apartments by the nighttime curfew, Nadia and Saeed, and countless others, felt marooned and alone and much more afraid.

The conditions of the city near Dubai worsen, until there is no electricity, nor piped water for the toilets to work. When they pay in order to escape, Saeed’s father will not leave because “he preferred to abide, in a sense, in the past, for the past offered more to him.”

I am gaining an awareness of the pain within a refugee camp.

Their funds were growing thinner, more than half the money with which they had left their city now gone. They better understood the desperation they saw in the camps, the fear in people’s eyes that they would be trapped here forever, or until hunger forced them back through one of the doors that led to undesirable places, the doors that were left unguarded, what people were nonetheless trying, especially those who had exhausted their resources, venturing through them to the same place from which they had come, or to another unknown place when they thought anything would be better than where they had been.

They had escaped from their city through a door to Mykonos through another portal to London, where they live with other refugees in a luxurious home while angered nativists outside gather outside. They end in a refugee camp outside of San Francisco.

The novel is labeled with a Romance sticker on its spine, but I suppose that must be in part because there was no sticker with the word Refugees nearby. For surely it is as much about leaving one’s country for another, which can never be properly called home, as it is about the relationship between this young couple.

But, the end result of this book in my mind is disappointment. The writing is beautiful, the concerns immediate. Yet, I wish the characters  could have withstood the adversity they faced to stand by one another; I wish that not everyone seems to succumb to “finding their own way” as if that is the most important thing.