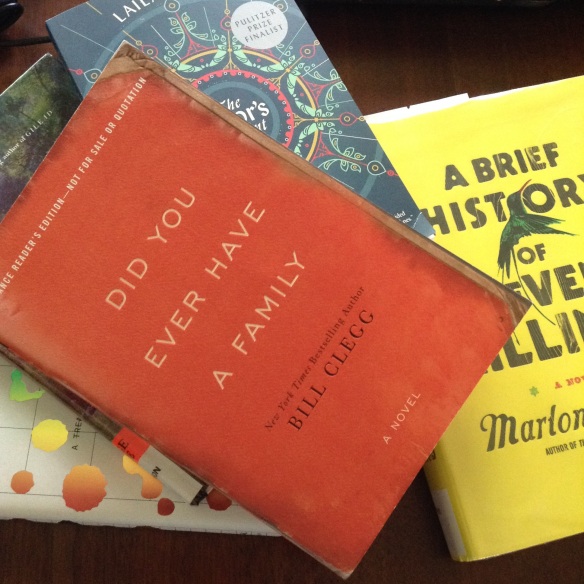 Yesterday, amidst all my Saturday chores (making meatballs and homemade tomato sauce for dinner, cleaning the house, folding the laundry, putting on an indulgent pout because I just wanted to read), there were a flurry of emails between the Wo-Man Booker shadow panel and myself. Feelings were strong, but as I was only able to read 8 of the 13 books listed on the long list, I acquiesed to those who have read all of the long list. The official shadow jury’s list will be shared tomorrow.

For today, let me share my top three from the eight that I have read:

Number 1, and the book that I think will take the Booker for 2015, is A Little Life. Some have said that the judges for the Booker do not choose long books to win, but when I look at last year’s winner, The Narrow Road to the Deep North, and the year before, The Luminaries, I have to disagree. Yet, length is not really the point. I have to choose A Little Life because of the sheer power of emotion is able to evoke.

Number 2 for me is Sleeping on Jupiter. The writing in this novel is exquisite, and the story of courage in one young woman against her cruel, and evil, circumstances moved me greatly.

Number 3 is Did You Ever Have A Family? The way that Bill Clegg offered his story from multiple perspectives is brilliant. He brought each character to life; he told of adversity in the extreme without leaving us hopeless.

None of the others struck me as powerful enough to be on the list, although let met say I have not yet read Lila or A Brief History of Seven Killings (see yesterday’s post) which seem like they will need to be added to my top three. I have begun A Brief History of Seven Killings and cannot put it down. I thought A Spool of Blue Thread, The Illuminations, and even The Green Road, fine books. Just not fine enough to win the Booker. And, Satin Island I loathed! I could not connect with that novel in any way; even though initially I enjoyed his sarcastic tone, it quickly became overbearing, and worse, meaningless.

Tomorrow, find the official list of the Shadow Jury Panel. Meanwhile, I will continue with the books I have not yet read before the Man Booker Prize is listed October 13.