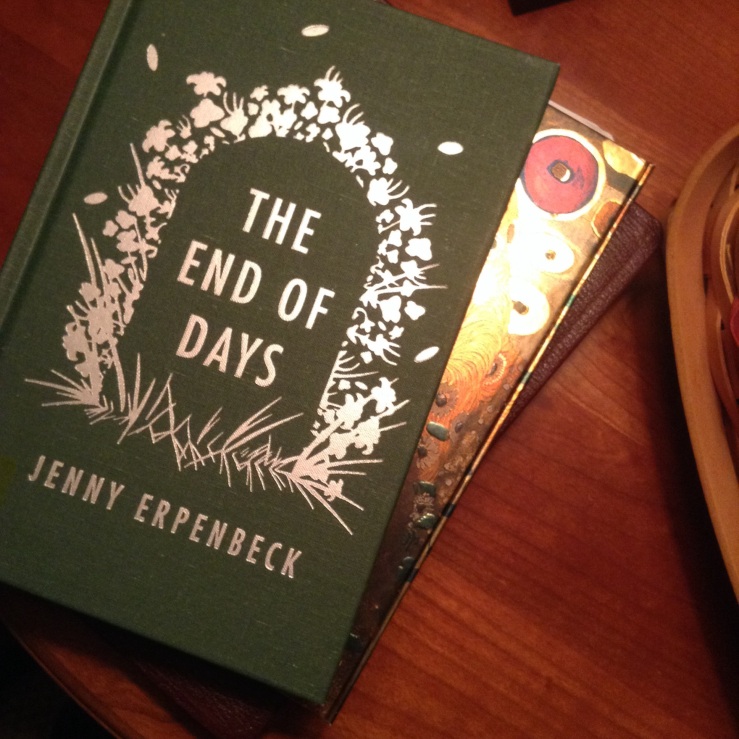 Several years ago, I was only able to read one book for the Independent Foreign Fiction Prize. It was The Detour, by Gerbrand Bakker, and I was not surprised to find that it was named the winner in May, 2013. That is how I feel about The End of Days, a book which is written with such tender and insightful prose it nearly takes your breath.

This novel is many things. The fly-leaf says, “A novel of incredible breadth and amazing concision, and the winner of the prestigious Hans Fallada Prize, The End of Days offers a unique overview of the twentieth century by “one of the finest, most exciting authors alive” (Michel Faber). And while it certainly is a portrayal of Germany’s history from 1900 through the next hundred years, it is so much more.

None of the characters are named. They are simply the baby, the oldest daughter, the mother, the grandmother. Yet we are able to understand who is who as the characters are woven together through five books, in between which comes an Intermezzo.

Each of the five books supposes a different scenario with the female protagonist. (Done far more brilliantly than Kate Atkinson’s work in Life After Life.) First, there is the baby who dies an infant.  In Book II, the author imagines that the baby had lived and is now seventeen years old living in Vienna. In Book III, the girl is a woman in her thirties who has entered the Soviet Union and lives in Moscow. In Book IV, the woman is in her 60’s and living in Berlin. The novel ends with Book V, when the woman is 90 and visited by her son in the nursing home where she is cared for. Through each of these scenarios, we see the impact that history has made particularly on the Jewish people, the Germans, and the Russians. But the scope is much larger than that. We see the impact of life on humankind.

I could not stop highlighting certain passages:

Jenny Erpenbeck was born in East Berlin in 1967. She is the author of several works of fiction, including The Book of Words (2007) and Visitation (2010), both translated by Susan Bernofsky and published by New Directions. The End of Days won the prestigious Hans Fallada Prize in 2014. Also an opera director, she currently lives in Berlin.