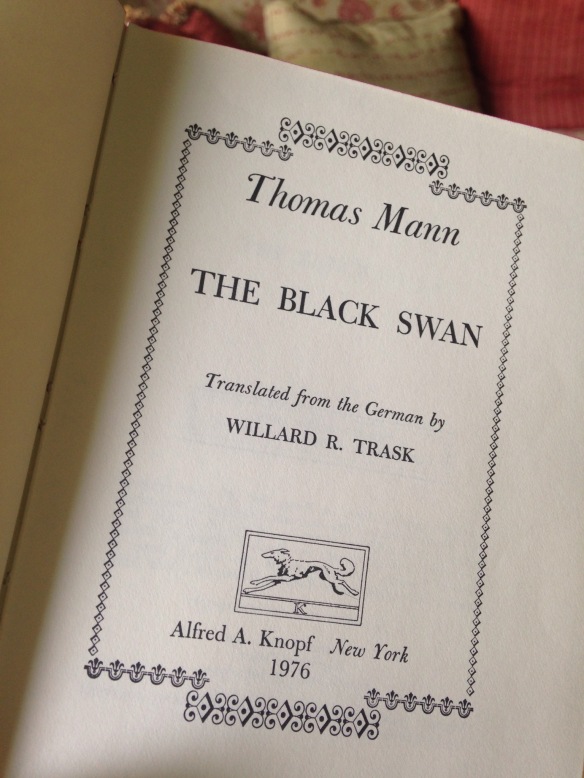 The Black Swan is the first book by Thomas Mann I have ever read. I picked it up because I was intrigued by the theme: an older woman unwilling to face aging. Only, the “older woman” in this book is younger than I am.

Rosalie was still capable of the old warm laughter that came bubbling from her heart-even at this period of her time in life, the spasmodic withering and disintegration of her womanhood, were troubling her physically and psychologically.

Rosalie Von Trummler is a widowed mother of two. Her daughter was born with a club foot, and has therefore rejected advances of love. Her son requires a tutor for adequate advance in his studies. A young American named Ken Keaton is hired to teach Eduard, and he soon becomes a regular addition to the family’s evenings. I was so intrigued by Ken’s point of view about America, one which I can see Europeans adopting. Yet, he does have valid points:

In general, despite being so unmistakably American in his entire manner and attitude, he displayed very little attachment to his great country. He ‘didn’t care for America’; indeed, with its pursuit of the dollar and insensate church-going, its worship of success and colossal mediocrity, but, above all, its lack of historical atmosphere, he found it really appalling. Of course it had a history, but that wasn’t ‘history,’ it was simply a short, boring ‘success story.’ Certainly, aside from its enormous deserts, it had beautiful and magnificent landscapes, but there was ‘nothing behind them,’ while in Europe there was so much behind everything, particularly behind the cities with their deep historical perspectives. American cities-he didn’t care for them. They were put up yesterday and might just as well be taken away tomorrow. The small ones were stupid holes, one looking exactly like another, and the big ones were horrible, inflated monstrosities, with museums full of bought-up European cultural treasures.

At any rate, Rosalie becomes entranced with Ken and fancies romantic involvement with him. Page after page describes her attraction to him, her imaginations of what could be between them. She embarrasses her daughter by giving Ken longing looks across the dinner table, then alternately ignoring him “demurely.”

What should you say, Anna, if your mother, in her old age, were seized by an ardent feeling such as rightfully belongs only to potent youth, to maturity, and not to withered womanhood?

But what becomes the turning point in the novel is the morning that Rosalie has discovered she has begun bleeding again. A strong believer in the force of Nature, Rosalie is ecstatic. She can hardly contain her joy, which she sees as permission to enter into a relationship with the younger man.

Nature has made her voice heard against it (a motherly dowager-hood). She has made my feeling her concern and has unmistakably shown me that it need not be ashamed before her nor before the blooming young manhood which is its object. And do you not really mean to say that it does not change things much?”

Things are changed dramatically, indeed, for the source of this bleeding is not a reemergence into youth as Rosalie expects, but an admittance into the horrors of cancer. It is an ironic twist to be sure, how the advent of bleeding into a woman’s life can signify two such diverse states as preparation for the possibility of birth, or alternatively, death. Thomas Mann has portrayed an enormously silly woman in the mother, especially in contrast to her practical, more mature daughter. But he has also given us a terrific psychological twist as we realize that of course, our bodies are not under our control. No matter how strong our desire for youth may be.

(I read this book for Caroline and Lizzy‘s German Literature Month this November. I hope to read Thomas Mann’s Buddenbrooks as well…)