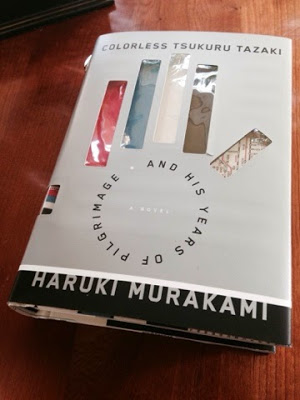 The first sentence is rather shocking. “From July of his sophomore year in college until the following January, all Tsukuru Tazaki could think about was dying.” It’s not exactly a hopeful beginning, and yet right from the beginning we are in touch with a familiar theme of Murakami’s: despair.

Tsukuru Tazaki’s despair is born of loneliness, a legitimate feeling since his four closest friends have abandoned him with no explanation. He is left wondering what he could have done to be rejected so completely, and having not even the strength to ask for explanations, he retreats to Tokyo.

As Tsukuru reflects on his four friends, he feels empty and isolated by comparison. One of the reasons is that each of the four had a name containing a color. The two boys’ last names were Akamatsu-which means “red pine”- and Oumi-“blue sea”; the girls’ family names where Shirane- “white root”-and Kurono-“black field.” Tazaki was the only last name that did not have a color in its meaning. From the very beginning this fact made him feel a little bit left out.” Even though Tsukuru’s name does not have a color, it does have significance; tuskuru means “to make or build.” It is a name which perfectly fits a character who is able to build train stations, and more importantly, who must build meaning into his life again.

While Tsukuru Tazaki swims laps at a pool in Tokyo, he meets a new friend, Haida (whose name means literally, “gray field”. And he also meets Sara, who is the impetus behind his pilgrimage. She knows that he cannot carry on without knowing the reason for his expulsion from the group, and it is she who encourages him to meet each one of the friends sixteen years later. Three times, by Chapter 11, this quote is given, “You can hide memories, but you can’t erase the history that produced them.”

Tsukuru’s pilgrimage is to find out why he was rejected. But more importantly than that, in my opinion, it is to find the strength to carry on regardless of the past. His pilgrimage is to put the past to rest, while bravely embracing the future with a confidence which has been dormant for far too long.

(I plan on rereading this book before September 12, on which I will post the discussion questions put forth by Random House. From there, those who have read Colorless Tsukuru Tazaki and His Years of Pilgrimage are welcome to answer any of the questions they choose. Please know now much I enjoy the discussion we began with the book cover yesterday. I look forward to more insight from your comments and reviews in the weeks to come.)

50 thoughts on “Colorless Tsukuru Tazaki and His Years of Pilgrimage: Initial ThoughtsAfter My First Time Through”