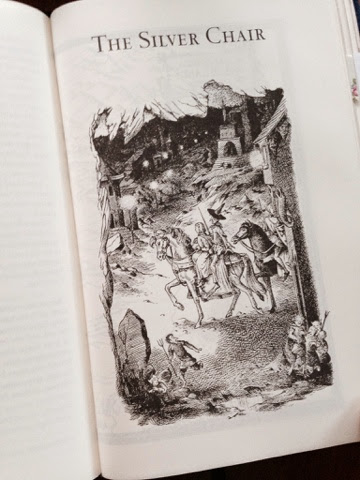 The best children’s books are the ones that adults can relate to the most. Like Charlotte’s Web, which though written for children, explains the sorrow of loss better than any book I know. Or, Flora and Ulysses which brings the trauma of divorce into high focus. But nobody takes on adult issues, and handles them so eloquently, as C. S. Lewis. And, it doesn’t matter how many times I read The Chronicles of Narnia, they speak to me afresh with each reread.

I just finished The Silver Chair this morning. It has all the things my son would love: swords and galleons, dwarfs and witches. But it has what I love, too: a way to look at things which make me sad that enables me to handle them.

Eustace Scrubb and Jill are sent on Aslan’s breath to fulfill a task he has for them. It is namely to find Prince Rilian, who has been bitten by a vicious worm, and bring him home. I won’t even go into the details of the story, the most obvious one being that the silver chair is a horrible enchantment of deception, except to dwell on the part with his father, King Caspian.

When the tasks are completed, and the Prince is finally home, his father’s ship comes into port. We are ready for a glorious reunion, and instead we sense that something is dreadfully wrong. King Caspian is brought forth on a bed, and he barely has time to greet his son before he dies. And I’m thinking, “What? All these tasks so bravely faced and courageously completed, for what?!”

But then C. S. Lewis takes us on Aslan’s breath to a new setting. To Home. And this is what we find:

Then he opened his mouth wide and blew. But this time they had no sense of flying through the air: instead it seemed that they remained still, and the wild breath of Aslan blew away the ship and the dead King and the castle and the snow and the winter sky.  For all these things floated off into the air like wreaths of smoke, and suddenly they were standing in a great brightness of summer sunshine, on smooth turf, among mighty trees, and beside a fair, fresh stream. Then they saw that they were once more on the mountain of Aslan high up above and beyond the end of the world in which Narnia lies. But the strange thing was that the funeral music for King Caspian still went on, though no one could tell where it came from. They were walking beside the stream and the Lion went before them: and he became so beautiful, and the music so despairing, that Jill did not know which of them it was that filled her eyes with tears.

Then Aslan stopped, and the children looked into the stream. And there, on the golden gravel of the bed of the stream, lay King Caspian, dead, with the water flowing over him like liquid glass…

Then Eustace set his teeth and drove the thorn into the Lion’s pad. And there came out a great drop of blood, redder than all redness you have ever seen or imagined. And it splashed into the stream over the dead body of the King. At the same moment the doleful music stopped, and the dead King began to be changed. His white beard turned to grey, and from grey to yellow, and got shorter and vanished altogether; and his sunken cheeks grew round and fresh, and the wrinkles were smoothed and his eyes opened, and his eyes and lips both laughed, and suddenly he stood before them – a very young man, or a boy.

I know of no better way to describe the hope which I believe is ours. The hope from a Savior who loves us more than we can possibly imagine.

7 thoughts on “The Silver Chair by C. S. Lewis”