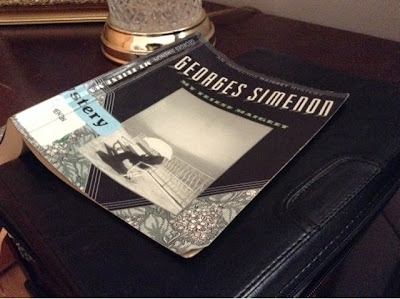 I already love him, this famous Inspector Maigret about whom I’ve been hearing so much. By page 20, I see that we have similar feelings, he and I. For example, here’s a passage about work:
“Don’t you like the Mediterranean?”
“In general, I dislike places where I lose the desire to work.”
“That’s because you like working, is it?”
“I don’t know.”
It was true. On the one hand he railed every time a case came along to interrupt his daily routine. On the other hand as soon as he was left in peace for several days he would become restless, as though anxious.”
Or, how about this simple phrase?
“Not yet sure if he was in a good temper or a bad one Maigret grumbled as he fumbled in his suitcase for his razor.”
I don’t fumble for a razor in the morning. But I do often wonder if I’m in a good mood or a bad one; it isn’t always readily clear on any given morning.
Even if the mystery would prove to be disappointing, I can tell that Maigret himself will not be. No wonder Georges Simenon is as beloved an author as the Inspector he created…
When a man named Marcellin is killed (on the Mediterranean island of Porquerolles) for proclaiming his admiration for Chief Inspector Maigret, the Inspector leaves Paris to investigate. He is shadowed by a British policeman, from London, who has been invited by Maigret to see how it is that the French solve cases. (Like a brother in law and his wife, who are perfectly respectful but annoying after five days, Maigret wonders how long he can abide this policeman’s company. Even though Maigret himself invited him.)
While the setting is not in Paris, it sounds like the most appealing French island, where people must take a boat to and from the mainland. It is a perfect description for a summer escape: the air is tropical and balmy; the trees are tamarisk, olive and pine; and white wine is drunk every evening by the citizens who gather at the Arche for conversation and games.
It makes me long for an era gone by (this novel was first published in 1949), for the south of France, and for people who lead simple lives, albeit with secrets of their own. It makes me long for more novels involving Maigret, a character for whom I feel more affinity than Inspector Clouseau, Hercule Poirot, or even Chief Inspector Armand Gamache himself.

11 thoughts on “Paris in July: My Friend Maigret by Georges Simenon”