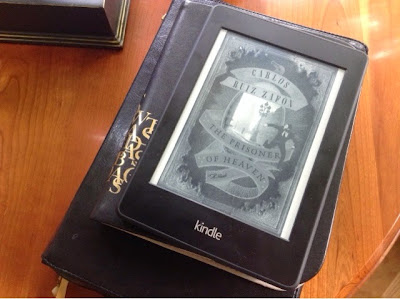 I disliked The Shadow of The Wind, which is the first book of the trilogy by Carlos Ruiz Zafon (followed by The Angel’s Game and then The Prisoner of Heaven). I even read it twice, once on my own and once to refresh my memory for a book club discussion, neither time liking anything but the idea of a secret library and of selecting one book to guard for your lifetime.
But then I downloaded a free excerpt by Carlos Ruiz Zafon from Nook, Rose of Fire, which gave some background about the Cemetary of Forgotten Books, and my interest was renewed. With vigor.  So, skipping the second book entirely, I have just completed the third and found it wonderful. (They can be read as stand alone books.)
Much of the plot mirrors The Count of Monte Cristo, in that honorable men are imprisoned alongside thieves, and how can one escape? Using the same tactics, our hero Fermin Roman de Torres pretends he is dead and exists the prison, Montjuic Castle, in a bag reserved for corpses. He leaves behind a character named Salgado, who has endured the loss of two fingers and an entire hand in order to keep a secret: the exact location of a huge amount of money he had killed for and stolen.
But of course it is this same Salgado who had entered the bookstore in the very first chapter, before the long and complicated story of their imprisonment was revealed, and it is he who has also escaped and is attempting to retrieve his treasure.
The charm of the book is in a story well told. We return to the characters of Daniel Sempere, and his father. We return to Daniel’s wife, Bea, and son Julien. We return to the streets of Barcelona, and waiting for the mystery involving Fermin’s past to be revealed. And we discover the likes of Mauricio Valls, as evil a character during the Franco regime as ever lived. 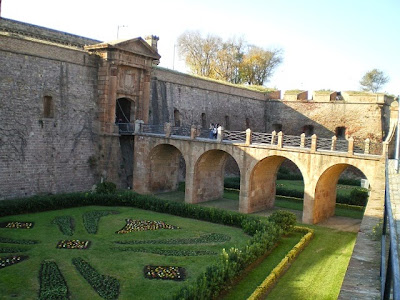 (Interestingly enough, as I continue my reading for Spanish Lit Month with Marc Pastor’s Barcelona Shadows, Montjuic Castle reappears. It is a castle which was also a prison, with plenty of corpses surrounding it underground.)

8 thoughts on “Spanish Lit Month: The Prisoner of Heaven by Carlos Ruiz Zafon”