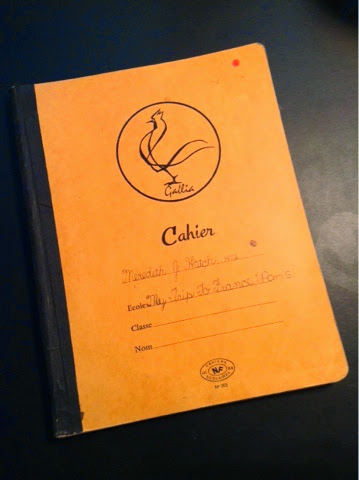 In August, 1972, my parents took us to France for the first time. I had just finished fifth grade, and with it the novel Harriet The Spy by Louise Fitzhugh. Harriet has no bearing on Paris whatsoever, other than the explanation of why I kept such a detailed journal; I imagined it would be great fun to be a spy.
When I compare my writing with what my third graders can write today, I am almost ashamed. The sentences are stilted and trite. They are incredibly naive. Yet, they give an indication of what Paris was like for a young American girl. They lay the foundation for the first trip I made to the City of Light. 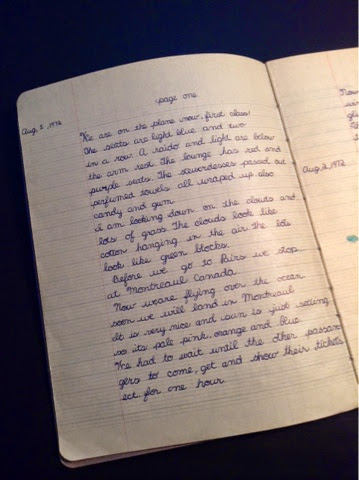 On August 1, we flew on Air France from Chicago to Paris, with a stop in Montreal. Apparently the stewardesses passed out perfumed towels, candy and gum; who knows about dinner? I didn’t bother to mention that except in a post script at the end of the day: “We had a very good supper of chicken.”
For breakfast, on August 2, there was “grapefruit and rolls with their marvelous, creamy, unsalted butter.” (Unsalted butter was a rare breakfast treat which I have continued eating ever after.) 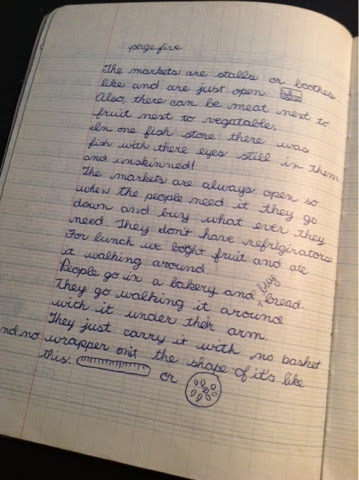 On August 3, I took notice of the Parisian markets. “The markets are stalls or booths and are just open. Also, there can be meat next to fruit next to vegetable. In one fish store there was fish with there eyes still in them and unskinned!
The markets are always open so when the people need it (to) they go down and buy whatever they need. They don’t have refrigerators (can this be true?). For lunch we bought fruit and ate it walking around.
People go in a bakery and buy bread. They go walking around with it under their arms, they just carry it with no basket and no wrapper on it. The shape of it is like this…(a baguette) or…(a round loaf).”
(I think of the American way of shopping in the early 1970’s: huge supermarkets with food so “cleaned up” it hardly resembled its original state. Everything was wrapped in plastic, filled with preservatives, and disguised in convenient forms. Thank goodness stores like Whole Foods are bringing natural foods back to us.)
August 4:  After detailed observations on the size of French automobiles (teeny), and police cars shaped like a “miniature bus”, I went on to describe a Roman church in Montmartre. Evidently we visited many churches and famous buildings; the only one whose name I bothered to record wasn’t even the name but an inscription: Aux Grands Hommes La Patrie Reconnaissante on the Pantheon. 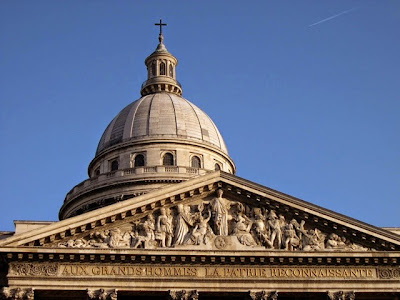 August 6: “We took a train to a place named a name I can’t remember, but it sounds like Versi. (Versailles) We saw the palace of Louis the XVII. The palace was nice, but we loved the gardens! Fountains and evergreen trees in the shape of cones to line the paths in he garden. And, small ponds with lilies and goldfish in them. The fish love bread and everyone feeds them.” 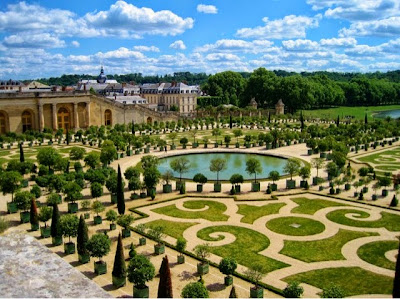 The entries go on and on with a rather tedious quality, so I will end on my final observation of Paris monuments: 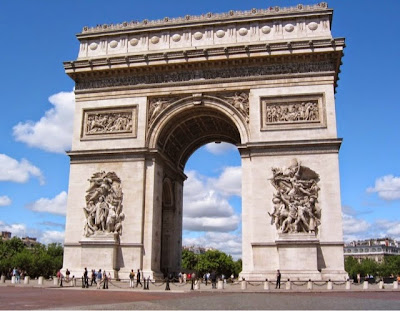 August 7:  “We walked into a laundromat. Then we went to the Arc du Triomphe. The French like it a lot, but all it is, is a grand stone carved like a bridge.”
Imagine a sentence about laundry followed by totally discounting the importance of the Arc du Triomphe! It makes me want to laugh to see my foolishness recorded in a diary I ought to toss away. Thank goodness for the patience the French exhibited then, so unlike the feelings for Americans the last time I went to Europe in 2001. But, that’s a story for another day.
Meanwhile, we have this month of July to explore all things French: food, film, fashion, literature, art…whatever it is that strikes your fancy. I have several posts planned, and I hope you do, too. I’m looking forward to sharing Paris in July with all of you. Bienvenue!