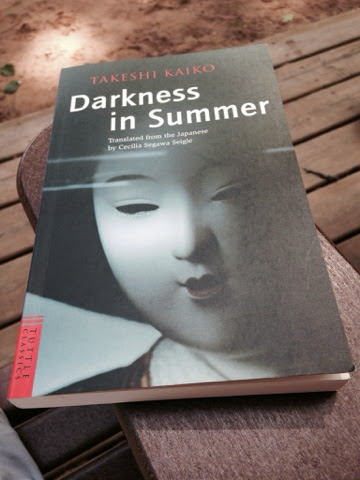 “I should have known, however vaguely, that no matter what exquisite originality of technique or device was used, nor how perfect the affair, a man and a woman are ultimately dreamers of different dreams on the same bed, that they are different sexual entities , and that they are only trying each to expand his own territory and his own fulfillment. The more closely they come together and the more they expand the territories of their individual bodies, the more they fragment and become isolated.”

I thought Darkness in Summer was going to be a love story. It is rather about two people going their own separate ways even after reconnecting for a brief time. It is a story of differences, and alienation, from one another and from their own country.

All he can do is sleep: a deep, indolent, self-indulging sleep. All she can do is dwell on her hatred for Japan, for after that there is nothing else.

After cursing Japanese travelers, newspapermen, and scholars, she ranted at the touring peasants who swaggered through hotel corridors in their underwear. She raged at Japanese “gentlemen” who begin telling bawdy jokes as soon as they have one drink and who (in a brother) shrink at the sight of a white woman’s naked body, and yet like to talk big. She fumed at the tourists who are read to present ukiyoe stamps and kokeshi dolls indiscriminately to hotel bellboys or cigarette girls in cabarets or to anyone at all…She cursed Tokyo, with its population of more than ten million and no capacity for treating sanitary waste, sixty to seventy percent of which is dumped in the ocean, while the city is  engrossed in building more highways and skyscrapers. She cursed reporters, scholars, and writers who criticize Japan and the Japanese. She stormed at the translators, publishers, the newspaper press, the right wing, the left wing, and she ranted at Japan and the Japanese in relation to everything she could think of.

Behind the venomous, cutting edge of these imprecations, there was an unmistakable air of loneliness.

How strange, to me, that this Japanese woman should be in Germany with her lover and find such venom within her about her own country. It speaks of the despair that shrouded them both, that neither one had something to hang on to; not a country, not a culture, not a place of belonging, not even each other.

One of the concepts brought up early on in the novel is Chinese. Apparently three Chinese characters, ku ai tzu, refer to a parentless child. An orphan.

This word expresses the feeling of helplessness much better than saying ‘orphan’ or ‘parentless child.’ I was impressed. It’s actually an expression used in an announcement of death by the bereaved child, and it means something like ‘an orphan in mourning’. But I am a Ku ai tzu, no father, no mother, and I have chosen to desert other relatives. I have one brother, but he changed his name for a particular reason. I liked him, but we’re so far apart. Besides, I don’t intentd ever going back to Japan. So, I’m a Ku ai tzu–a ‘mischief of nature.’

These are the themes of the book, a most fascinating work by an author who is new to me. Takeshi Kaiko (1930-1989), winner of his country’s highest literary awards–both the Akutagawa and the Mainichi–was born and raised in Osaka. Originally slated for a career in law (he graduated in law from Osaka City University), he became instead a foreign correspondent, first at the United Nations
and then in Vietnam. His other novels include Panic and Naked King. He is ranked by Japanaese critics, with Kobo Abe, as one of Japan’s two most important novelists of the generation since Mishima. (from the back cover)

Thanks to Tuttle publishers, who have kindly sent me this book, I am able to send it to a winner, especially one who is participating in the Japanese Literature Challenge 8. Please leave a comment
with your email below, if you wish to be considered for the give-away. Of course, I am willing to mail internationally. The winner will be announced July 15.

The winner of The Darkness in Summer is Carola, of The Brilliant Years.