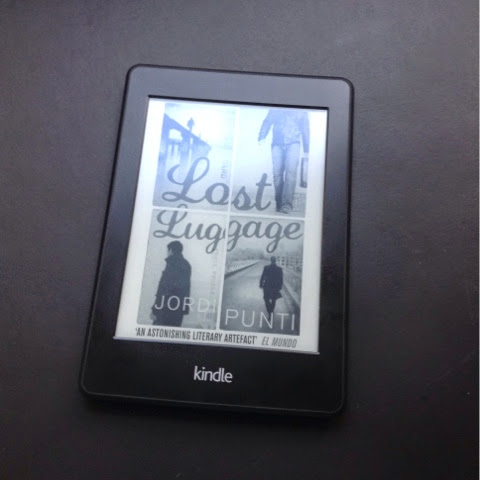 I picked up this book on my kindle last night after hearing a woman in our book club rave about it. Knowing that Spanish Lit Month 2014 hosted by Richard and Stu is just around the corner, I began it last night. Because Richard is too polite to say anything like, “Bellezza, have you finished Bolano’s 2666 yet? You know, from the read-along in January?”
In order to not lag behind again, (still), I began Lost Luggage by Jordi Punti last night. And so far? It’s great. I’m enjoying it more than I have any of Bolano’s books, but probably that says more about me than it does about Roberto who is much beloved by Those Who Know.
The premise of Lost Luggage lies with one father of four sons, each of whom have a different mother. In a different country, no less. Christof, Christophe, Christopher and Cristofol are four brothers who live in four different cities (Frankfurt, Paris, London and Barcelona) unaware that their common tie is their father, Gabriel Delacruz.
While this might sound appallingly like a soap opera, it actually has me quite transfixed as I read about the brothers meeting, the brothers comparing their lives, the brothers wondering exactly who their truck driver father is. When I discover for myself, I shall let you know.
(from amazon.com: “Divided by geography yet united by blood, the “Christophers’ set out on a quest that is at once painful, hilarious and extraordinary. They discover a man who during thirty years of driving was able to escape the darkness of Franco’s Spain and to explore a luminous Europe, a journey that, with the birth of his sons, both opened and broke his heart.”)

In the meantime, this is just one of the books I hope to read for Spanish Lit month this July. Also included in the stacks is Gabriel Garcia Marquez’ Love In The Time of Cholera and hopefully something by Sandra Cisneros or Julia Alvarez whose writing I have adored in the past.