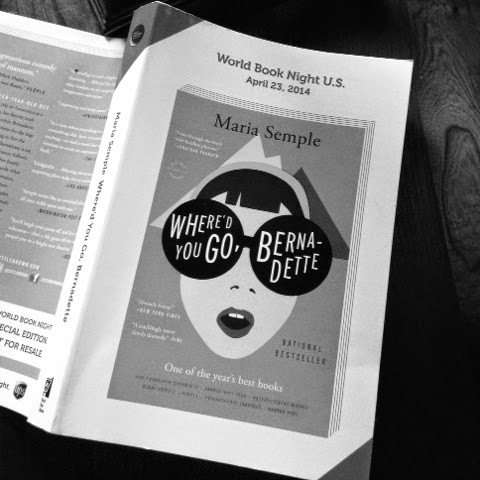 Is there anything Semple doesn’t (justly) scorn in this most wonderful novel? From schools to neighborhoods, administrators to parents, Microsoft to architecture, she has a brilliant quip for it all. I’ve longed for the boy who says of the emporer, “But, he isn’t wearing any clothes!” and all the time he’s been disguised as the author, Maria Semple.

The novel is told from Bernadette’s daughter’s point of view, in the form of documents written by Bernadette’s husband, their neighbor, the school principal, psychiatrists and policemen. They all take part in telling the tale behind Bernadette’s disappearance, an unexpected leave of absence from her day to day life.
I kept telling my friends at school, to whom I’d given the book for World Book Night 2014, “I love Bernadette! I can totally relate to her,” and they’d look at me askance while asking, “Have you finished the book yet?” But I didn’t need to finish the book to relate to her utter frustration with her career, her feeling of no longer being productive, her annoyance with people.

“You want to know the coolest part?” (of their planned trip to Antarctica) Mom chimed in. “There isn’t any assigned seating at the dining room, and they have tables for four. That means the three of us can sit down and if we pile the extra chairs with our gloves and hats, nobody can sit with us!”

Dad and I looked at each other, like, Is she joking?

“And penguins,” Mom quickly added. “I’m wildly excited about all those penguins.”

That whole scene makes total sense to me; I’m much less interested in new adventures than I am concerned about having to sit through a whole dinner with strangers who hope I’ll be entertaining. I don’t want to be entertaining, I want to be left alone. Hence one of my many connections to Bernadette.
I also love that she chose an abandoned girls’ school as their family home in Seattle, never mind that it leaks rust colored water into spaghetti pots or has blackberry brambles which infuriate an already infuriating neighbor. I loathe McMansions, homes with no personality at all on the inside, but a perfect facade on the outside.
But, this book is not about me. It’s about Bernadette, a hurt and frustrated architect, her gifted daughter, Bee, and her Microsoft employed husband who’s working so hard he’s never home. He does, however, have time for his admin, Soo-Lin.
And when he has to, he finds the time to be with his daughter as she searches for her mother. Somewhere, she is sure, in Antarctica.

25 thoughts on “Where Did You Go, Bernadette? by Maria Semple”