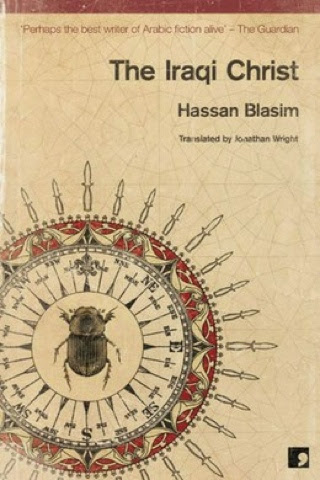 The Iraqi Christ by Hassan Blasim
Translated from the Arabic by Jonathan Wright
I’ve been reading this year’s Independent Foreign Fiction Prize long list (along with a group of book bloggers chaired by Stu) and Bellezza has kindly invited me to share my thoughts on one of the long listed titles.
The Iraqi Christ by Hassan Blasim, translated by Jonathan Wright, is published in the UK by Comma Press. This collection of fourteen short stories gives us a striking insight into the traumas and turmoil that penetrate the lives of Iraqis. Instances of violence, slaughter and torture are commonplace and these stories are peppered with searing images:

I heard what you wrote yesterday. How the first explosion shredded Marwan’s face. The windows shattered and the cupboards fell on top of him. His mouth filled with blood. (pg. 57)

Characters are often trying to erase or contend with painful memories of past events. Blasim draws on fables, dreams and metaphors to great effect here, mixing the surreal with thetangible to illustrate the nightmares that haunt these people as they go about their lives:

The trees sprouted out of the ground, then spread and grew within minutes to a height of more than a hundred feet. They were born dead, without leaves, and their thin branches were entangled like broken cobwebs. Every tree killed the ground for half a mile around it in a circle. The soil turned to rock and no form of life survived. It was a disaster. (pg. 105)

The Iraqi Christ is a powerful and vivid set of stories. I particularly liked the mix of abstract and realist elements, especially in ‘The Hole’ and ‘A Wolf’ (two of the strongest stories in this book). In ‘The Hole’, we meet a man on the run from two gunmen. Our man drops into a hole in which he finds a djinni and the body of Russian soldier from anotherwar. The story has a hallucinatory quality to it, as does ‘AWolf’ in which the lines between reality and imaginary horrors start to blur:

I was on my way to the bathroom when I saw the thing running towards me from the sitting room. I jumped into the bathroom and slammed the door behind me. I was likesomeone who’d seen the Angel of Death. It was a wolf. A wolf, I swear. (pg. 46)

Blasim’s collection of stories certainly deserves its place in the IFFP long list, but I don’t think it’s quite up there with some of the other contenders for this year’s prize (and it’s a strong field this time). The stories vary in their approach and tone; some of the tighter, more focused narratives worked particularly well for me, while others I found a little meandering at times. At one point, a character says:

‘But we’ve strayed from the subject. Is my chatter making you dizzy?’ (pg. 50)

Yes, perhaps just a little. And yet, like many of the books I’ve read from the IFFP long list, this one took me to a different place, another world.