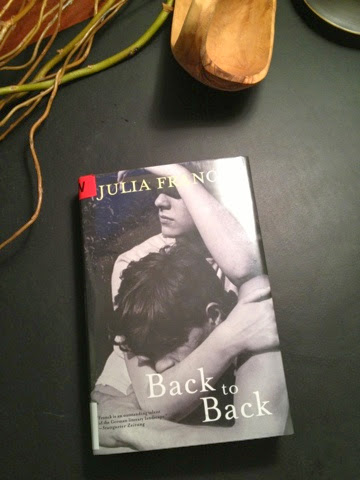 “Even his own helplessness, and this was not the first time he had felt it, seemed to him small and ridiculous in the face of the general helplessness and immense misery of the world.”
The world which Julia Franck gives us, Eastern Germany in the early 1960’s, is indeed a miserable place. At least it is within the home where Thomas and Ella live with their mother, Kathe.
Is there a more heartless woman? When we first meet her she has left her tenand  eleven year old children home for two weeks. Their desire to please her leads them to completely scrub every inch of the house, to the point where Ella is scrubbing the underside of a table with a knife and steel wool. But on her return, Kathe notices nothing but empty bottles which have been left on the stairs. She is a woman completely unable to show any warmth or affection to her children, so absorbed is she in her own agenda.
The situation involving a lodger from the government who rapes her daughter secretly, repeatedly, in the middle of the night is paid no attention.
The way her son is bullied at the stone quarry where he is sent to work, the description of which brought tears to my eyes, is paid no attention. Until he comes home so ill he’s at the point of death.
It is a stranger, sent for at Ella’s suggestion, who is able to heal him from his disease. Perhaps what begins the healing in earnest is her warmth and concern for him, a warmth which has not been given to him by his mother.
Thomas also finds solace in Maria, a nurse at the hospital to which his mother has sent him to study medicine. She is abused quite terribly by her husband. They turn from the harshness in their lives to one another, finding comfort in their love. In a secret they plan out together…
I think of the two siblings, sitting back to back, one telling stories she’s made up about their absent father to comfort her brother. Then I think of the two sides of Germany, once back to back before the Wall came down.
Does one of them have to fall for the other to live?
Like all the books I’ve read for the IFFP (International Foreign Fiction Prize), I found this novel to be so terribly piercing. Its poignancy will long live in my heart, as does The Mussel Feast which came before it.

6 thoughts on “Back to Back by Julia Franck”