The Infatuations by Javier Marias 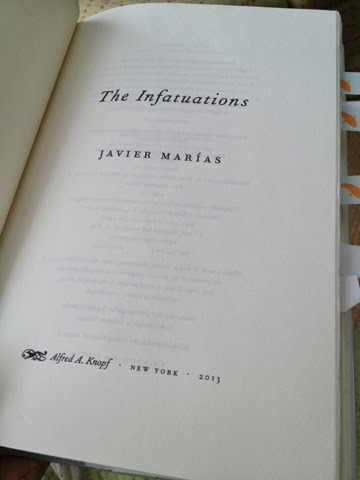 “…the reality is that anyone can destroy us, just as anyone can conquer us, and that is our essential fragility.”

The Infatuations begins with Maria Dolz, a meek and submissive woman who works at a publishing house, relating how she observes a married couple at a local cafe in Madrid nearly every day. She is obsessed with watching them from several tables away, although she isn’t aware that they, however briefly, have noticed her in turn. They have even gone so far as to nickname her The Prudent Young Woman. It is through this young woman’s eyes that the story is revealed, a story ostensibly involving a murder, but actually discussing such themes as envy. Death. And, of course, the way infatuations can manipulate our lives.

The marriage of Miguel Desvern (sometimes written Deverne) and Luisa comes to an abrupt end early on in the novel when he is found stabbed to death by a homeless man who believes that Miguel was responsible for the prostitution of his two daughters. Although Miguel is in the operating theater five hours, it is impossible to save him.

Miguel’s widow, Luisa, is so distraught she can barely care for herself let alone their two children. After Maria observes the mother disinterestedly sitting with her young daughter and son as they eat an ice cream, she brings herself to comfort Luisa and is invited to their home. Their conversation is interrupted by two visitors, one of whom is Javier Diaz-Varela, who apparently has a place in this home as a much needed source of strength.

When Diaz-Varela sees Maria at a museum he invites her for a drink, and the two begin a relationship. But, it is clear that Maria is the one who is infatuated with Javier, while his infatuations lie elsewhere.

One day Diaz-Varela tells Maria the story of a colonel who, though believed dead through a terrible encounter with a sword, run over by two men sent to save him, and thrown into a pit next to a mound of dead bodies, actually lives. He returns to his wife, only to have found that she has carried on with her life in his absence, never for a moment believing that he would return. This novella by Honore de Balzac, Le Colonel Chabert, is used by Diaz-Varela “as evidence that the dead are fine where they are and should never come back, even if their death was untimely and unjust, stupid, gratuitous and unfortunate like that of Desvern, and even if there was no risk of them ever reappearing.” (p. 143)

This is a point that is brought up several times through the novel; that the return of someone from the dead would be more of a disadvantage to the living than an advantage. It is a point of view which behooves some of the characters more than others.

As I read this novel, I found myself marking several passage concerning death with sticky notes. They struck me in particular as I, too, have had the experience of being a widow. Of mourning the loss of a husband and wondering how to carry on alone with my son. For those reasons, I can empathize more with the widow Julia than I can with the meek and submissive Maria. I leave them here in order of how I encountered them:

“That’s another of the problems when one suffers a misfortune: the effects on the victim far outlast the patience of those prepared to listen and accompany her, unconditional support never lasts very long once it has become tinged with monotony. And so, sooner or later, the grieving person is left alone when she has still not finished grieving or when she’s no longer allowed to talk about what remains her only world, because other people find that world of grief unbearable, repellent.” p. 62

“I want to be where he is, and the only place where we could coincide is the past, in that place of not being but of having been. He is past, whereas I am still present. If I were also past, at least I would be the same as him in that respect, which would be something, and I would be in no position to miss him or remember him. I would be on the same level as him or in the same dimension, in the same time, and we would not be left alone in this precarious world in which everything familiar is being taken away from us. nothing more can be taken away from us if we are not here. Nothing more can die on us if we are already dead.” p. 84

“We tend to hope that, of the people and habits we cherish, no one will die and none will end, not realizing that the only thing that maintains those habits intact is their sudden withdrawal, with no possible alteration or evolution, before they can abandon us or we abandon them. Anything that lasts goes bad and putrefies, it bores us, turns against us, saturates and wearies us. How many people who once seemed vital to us are left by the wayside, how many relationships wear thin, become diluted for no apparent reason or certainly none of any weight. The only people who do not fail or let us down are those who are snatched from us, the only ones we don’t drop are those who abruptly disappear and so have no time to cause us pain or disappointment.” p. 107

The Infatuations is an international best seller; it is also included in this year’s long list for the International Foreign Fiction Prize. As one of the members of the Shadow Jury, I rate the story 6 out of 10, the writing 8 out of 10, and the potential longevity 7 out of 10. For, as Maria herself says, she longs to read “…the literature that time has sanctioned and miraculously authorized to ensure beyond the briefest of moments, which grows ever briefer.”

Also reviewed at The Mookse and The Gripes, Winstonsdad’s Blog, Tony’s Reading List, Follow The Thread, and Messenger’s Booker.

25 thoughts on “The Infatuations by Javier Marias”