I noticed last night that the Classics Club Event is Feminist Literature in March. I poured over the list and felt half confounded by the articles and books suggested on certain sites.

This morning, in turning to my Bible as I do almost every day, the subsequent chapter in my reading was  Paul’s first letter to the Corinthians, Chapter 11:

“Now I want you to realize that the head of every man is Christ, and the head of the woman is man, and the head of Christ is God. Every man who prays or prophesies with his head covered dishonors his head. And every woman who prays or prophesies with her head uncovered dishonors her head–it is just as though her head were shaved. If a woman does not cover her head, she should have her hair cut off; and if it is a disgrace for a woman to have her hair cut or shaved off, she should cover her head. A man ought not to cover his head, since he is the image and glory of God; but the woman is the glory of man. For man did not come from woman, but woman from man; neither was man created for woman, but woman for man. For this reason, and because of the angels, the woman ought to have a sign of authority on her head.

In the Lord, however, woman is not independent of man, nor is man independent of woman. For as woman came from man, so also man is born of woman. But everything comes from God.” (1 Corinthians 11: 3-12)

My dear friend Carol and I have often scorned women feminists. “If they weren’t so vocal,” she says, “we could still be at home doing just one job instead of out in the work force adding more to an already huge amount of responsibility.”

And as much as I have loved my career of teaching, and I do, I often think how lovely it would be to stay at home making sure that the laundry was done on days other than Saturday, that every night a meal was placed on the table where I wasn’t exhausted in doing so. I love my home. I love to care for it so it looks pleasing and comforting. I’d love to give it the attention it deserves full time instead of around the edges of my life. 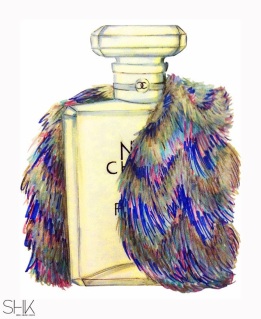 I like it when my husband compliments me on how I look, when he says, “You smell nice!” after sniffing my Chanel, or, “That’s a good color red on you.” I like it when he protects me and thinks of me with small acts of kindness like Cadbury’s dark Easter eggs placed on the counter just because he knows I like them.

So, I’m going to do some reading of novels classified as “feminist” in March. Surfacing by Margaret Atwood is one, because I’m crazy about Margaret Atwood’s writing. I’ll probably throw in some Persephone books as well. But, all the while I’m reading I won’t necessarily be thinking, “Women are equal to men.” I’ll be thinking, “the woman is the glory of man.”

Because to me, she is.

20 thoughts on “The Woman is The Glory of Man; Feminism in March”