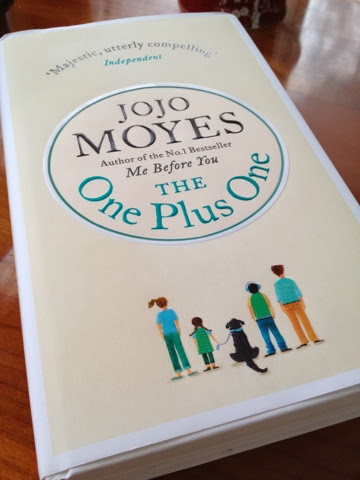 JoJo Moyes has a writing style which is so down to earth, so in touch with her endearing characters, that it makes me embrace all that is imperfect in this world. Suddenly, the flaws which offend me  about me about myself dwindle down to size, and I am able to smile at how often one’s dreams are thwarted.
Jess is the glittery nail polished, flip-flop wearing heroine of the novel, who cleans houses, works in a bar, and cares for her two children. One is a stepson who keeps getting beaten up, and copes with life by hiding away with his stash. The other is a girl whose passion and strength is Math. It also resides with Norman, the huge, black family dog.
When these four are found next to the broken down Rolls that Jess’ husband left her, the adventure begins. They had been on their way to a Maths Olympiad, in the hopes that the little girl could win such a competition and gain the money required for acceptance into the private school, St. Anne’s. But, as strong as Jess’ determination was, it wasn’t strong enough to carry them from London to Scotland in a broken down car with no insurance.
Fortunately, Ed Nicholls, a client of Jess’ found them. He volunteers to drive the whole group in his immaculate car, and before long a hilarious and grievous debacle begins. The dog, Norman, drools all over the leather seats which have chocolate buttons now melted into the crevices; sweaters and books are cast about; real life has entered in to Ed’s luxurious, but crumbling, life.
Of course, it’s clear that the Ed and Jess will fall in love. That their strengths and weaknesses compliment one another. But, a wedge comes between them which could effectively divide them forever.
In The One Plus One JoJo Moyes writes of our imperfections, the ultimate kindness of strangers, unlikely heroes, and most of all, hope.
For, as Jess says, “Good things do happen.” It’s just up to us to believe that they do.

9 thoughts on “The One Plus One by JoJo Moyes”