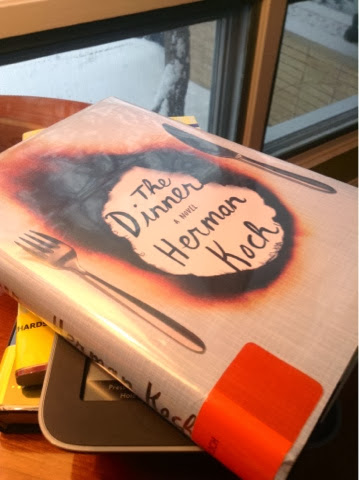 Herman Koch examines each detail of his diners as closely as the waiter articulates the origin of each course. Nothing is too minute to point out, but it isn’t boring. It’s a slow reveal with building tension much like a Hitchcock film; you’re actually poised in your chair for the conclusion, practically unable to wait for it any longer. As Alfred Hitchcock says, “There’s no terror in the bang, only in the anticipation of it.”

Four parents meet at an exclusive Dutch restaurant to hold an important discussion about their sons, and as we go through each course, from aperitif to dessert, we become increasingly aware that something terrible has occurred. Through veiled looks and subtle movements, to the point of shouting and crying, we are led through the dinner. Through the actions of their sons. Through the shocking conclusion.

Perhaps what is most shocking is the attitude of the parents, the way that one pair wants to reveal all that has happened, while the other pair not only wants to hide it but ignore it. I found myself wondering how it is that some people are able to focus more on image than on truth. Or, on getting by than being accountable for their actions. And throughout the novel are little lines which made me stop short.

One father tells us in his narration, “We never tried to influence him (his son); we would have let him have any dessert he liked, so you couldn’t blame it on his upbringing. It was hereditary. Yes, that was the only word for it. If heredity existed, if anything was hereditary, than it had to be our aversion to sweet desserts.” (p. 221)

Sweet desserts?! Sweet mother of God, desserts have nothing to do with the situation about which we are reading. I was mesmerized in my chair all day yesterday, unable to pull myself away from this novel which forced me to examine parenting. Responsibility. Heredity. The consequences of our free will.

The Dinner is an exceptionally exciting novel, with none of the conveniently contrived conclusions that I have found in so many “thrillers”. It would be perfect for a book club discussion, although it is perfectly suited to reading all in one day, by oneself, such as I did.

49 thoughts on “The Dinner by Herman Koch”