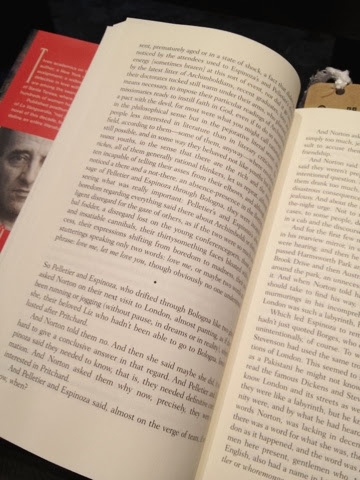 I think that this is what Bolano is trying to write. Wrote. Will have written when I come to the end of Part 5, the end of his novel. It feels as if he’s struggling against something, emotionally, as he writes with sentences that can run up to two pages apiece and characters as numerous as a flock of geese flying south in autumn.

We start with the critics:  Pelletier, Espinoza, Morini, and a woman, Liz Norton. They are passionate about the writing of Benno Von Archimboldi, the writings of whom I’d love to read myself. Alas, he is a fictional character and frankly, I wonder what it is about him that make them so utterly besotted. More committed to Archimboldi, in fact, than they are to each other. Hopefully, it is yet to be revealed.

Annoyed at the way Bolano teases us, disclosing very little about this supposedly famous German writer, I cling to the aura of mystery circling him:

“When one of the drunks recognized the song, he gave a shout and rose to his feet. Espinoza, Pelletier, and Norton thought he was about to start dancing, but instead he went over to the terrace railing and looked up and down the street, craning his neck, then went calmly back to sit with his wife and friends. These people are crazy, said Espinoza and Pelletier. But Norton thought something strange was going on, on the street, on the terrace, in the hotel rooms, even in Mexico City with those unreal taxi drivers and doormen, unreal or at least logically ungraspable, and even in Europe something strange had been happening, something she didn’t understand, at the Paris airport where the three of them had met, and maybe before, with Morini and his refusal to accompany them, with that slightly repulsive young man they had met in Toulouse, with Dieter Hellfield and his sudden news about Archimboldi. And something strange was going on even with Archimboldi and everything Archimboldi had written about, and with Norton, unrecognizable to herself, if only intermittently, who read and made notes on and interpreted Archimboldi’s books. (p. 113)

Two other “mysteries” are mentioned in the Part About the Critics. One is about Edwin Jones, the artist who cut off his right hand to display it in a self portrait. Why do such a thing? To imitate Van Gogh? For the money, as is whispered? It is, perhaps, to show “the endless variety of ways we destroy ourselves.” (p. 293)

The other mystery is something that Espinoza remembered hearing the night before, the story of the women who were being killed.

“…more than two hundred women had died. But not over a short period of time, thought Espinoza. From 1993 or 1994 to the present day…And many more women might have been killed. Maybe two hundred and fifty or three hundred. No one will ever know, the boy had said in French. The boy had read a book by Archimboldi translated by Pelletier and obtained thanks to the good offices of an internet bookstore. He didn’t speak much French, thought Espinoza. But a person can speak a language badly or not at all and still be able to read it. In any case, there were lots of dead women.” p. 137-138

And now I think that this post has too many long quotes, and not enough opinion, but I’m still struggling with that, you see. I’m still trying to sort out the pieces and the point that Bolano is trying to going to make. I’m not bored. But, I am confused by the jumble of information laid out before me. How this will resemble a complete picture is unclear to me which is why I’m so glad to be reading this with Richard and others.

Tomorrow, thoughts on The Part About Amalfitano.