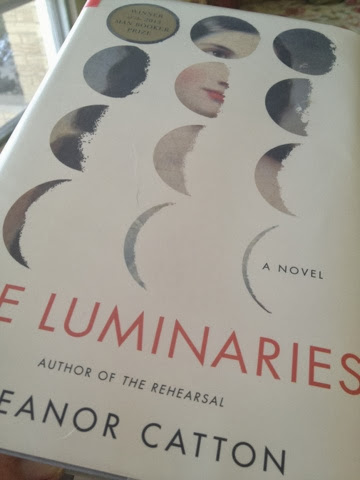 “For although a man is judged by his actions, by what he has said and done, a man judges himself by what he is willing to do, by what he might have said, or might have done–a judgment that is necessarily hampered, not only by the scope and limits of his imagination, but by the ever-changing measure of his doubt and self-esteem.” (p. 142)

I suppose at its heart, in the very middle of a circle which circles itself many times over, is the question of Emery Staines. Is this owner of gold-bearing ground in New Zealand alive? Did he, in fact, leave two thousand pounds to the whore Anna Wetherell? But the route to this question is so circuitous, so intricate, so multi-layered and nefarious that it took me to page 550 to even determine a core question.
Well, of course, there are other questions. Such as, “Is Mr. Crosbie Wells the same man as Mr. Francis Carver? And if so, what is the game that is being played between him and the other twelve men, each with his own agenda?”

“If I have learned one thing from experience, it is this: Never underestimate how extraordinarily difficult it is to understand a situation from an other person’s point of view.” (p. 622)

I am amazed at the skill with which Eleanor Catton has woven The Luminaries, a novel which even up to page 746 (of 830) has me guessing at supposed motives and the outcome of events. Is it a mystery? Yes.
Is it a finely crafted novel exquisitely written? Yes.
Is it any surprise that it won the 2013 Man Booker Prize? No.

21 thoughts on “The Luminaries”