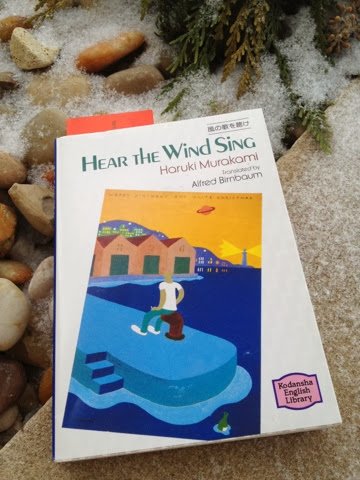 Quotes which Caught My Attention:

“Nonetheless, writing can also be fun. Compared to the sheer difficulty of living, the process of attaching meaning to life is altogether clear sailing.”
“Whatever can’t be expressed might as well not exist.”
“You’ve got to listen to the radio. Reading only isolates you. Admit it.”
“Nobody could figure out why she died. I doubt if even she herself knew.”
“Everything passes. Nobody gets anything for keeps. And that’s how we’ve got to live.”
(I’m intrigued in reading this book how the story revolves around a certain girl with four fingers, a girl our hero apparently loves very much. Yet, quite piercingly, she hangs herself in the woods and isn’t found until two weeks later. Hear The Wind Sing reminds me very much of Norwegian Wood, and while I will reread the later, I’m going on to Pinball, 1973 first. I have to read The Trilogy of The Rat in order now.)
Titles and authors mentioned in Hear The Wind Sing:
Sentimental Education by Gustave Flaubert
Cat On A Hot Tin Roof
Henry James
Moliere
Sorcieres by Michelet
The Last Temptation of Christ by Kazantzakis
One and A Half Times Around The Rainbow by Derek Heartfield (fictional author)
War and Peace by Tolstoy
The Brothers Karamazov by Dostoevsky
(Of this diverse list of authors mentioned by Murakami in Hear The Wind Sing, I’ve only read War and Peace and The Brothers Karamazov.That’s no surprise to me, as I love Russian authors as much as Japanese. Anyway, I’d like to read more of what’s listed here because they must be important to Murakami in some way.)
I read this book as my first book of 2014, and also for the Japanese Literature Challenge 7 and January in Japan.