There was an almost visceral reaction by many bloggers to my review of Paprika in 2011.  Like many Japanese novels, it is not the book for everyone. Yet, it just may appeal to you as an introduction to Japanese literature, or an addition to an ever expanding appreciation of it. 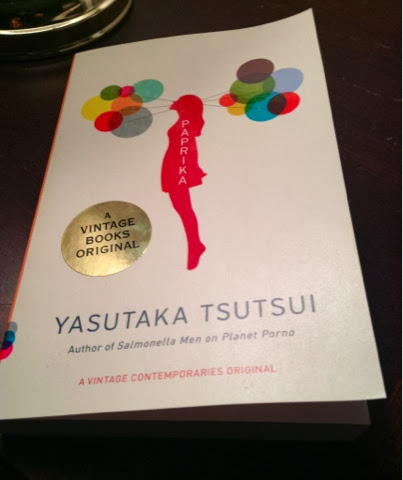 “Widely acknowledged as Yasutaka Tsutsui’s masterpiece, Paprika unites his surreal, quirky imagination with a mind-bending narrative about a psychiatric institute that has developed the technology to invade people’s dreams.
When prototype models of a dream-invading device go missing at the Institute for Psychiatric Research, it transpires that someone is using them to drive people insane. Threatened both personally and professionally, brilliant psychotherapist Atsuko Chiba has to journey into the world of fantasy to fight her mysterious opponents. As she delves ever deeper into the imagination, the borderline between dream and reality becomes increasingly blurred, and nightmares begin to leak into the everyday realm. The scene is set for a final showdown between the dream detective and her enemies, with the subconscious as their battleground, and the future of the waking world at stake.”
Take a look inside the novel here.

One of modern Japan’s most renowned writers, Yasutaka Tsutsui has won the Tanizaki Prize, the Kawabata Prize, and several other awards. He was decorated as a Chevalier des Arts et des Lettres by the French government.
If you would like to win this brand new Vintage Books edition simply leave a comment below by Wednesday, November 13. Thanks to Judith for sponsoring the Literary Blog Hop, and the participating blogs below which also are hosting literary give-aways. The winner of Paprika will be announced on Friday, November 15, and of course I will send it internationally.
Linky List: