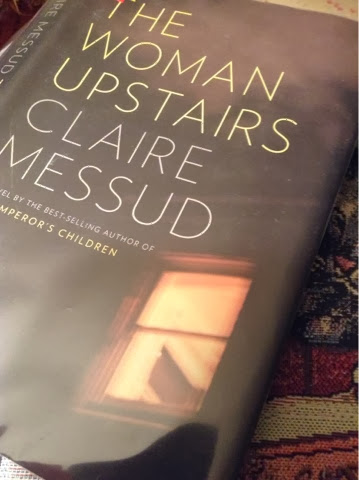 When a book strikes me in a deeply personal way, I rarely want to review it. Perhaps I make myself too vulnerable by writing about it; perhaps I won’t do the author justice in posting my reaction. And yet I can’t let The Woman Upstairs slip by without comment.

At first I thought The Woman Upstairs was going to be a version of Emma Donaghue’s The Room. As if the woman upstairs was actually trapped in some house, unable to escape. And in a way, she is trapped. But, it isn’t physically. It’s by her emotions, and we leave her at the end of the book, after she’s told her story, as we found her at the beginning:  mad, mad, mad, burning up angry, ready to set the world on fire hot, and she has every reason to feel this way.

For she has unwittingly placed herself last in her great capacity to love. She has given her heart away.

It is a heart that lacked confidence, for one thing. That lacked a sense of righteous selfishness, if you will, by which I mean that sometimes it’s important to stick up for what you need, instead of trying to please everyone else.

Nora Eldridge is a third grade teacher, a single woman of 42, who loves her class, loves her father, and loves to make art. But there is a pervasive emptiness in her life, a lack of connection to anyone special, and consequently a lack of meaning.  When she first sees Reza, a boy who comes to her class, she sees perfection. And she eventually becomes irrevocably involved with him, then his mother and finally his father. She loses all sense of herself in her obsession with them, but she doesn’t notice this because for once she feels alive. She feels purpose. She feels excited for every day to reveal itself to her.

There is a tragedy, of course, as everyone who has given their heart away knows is inevitable. It is a bitter, bitter thing for her to accept, and yet? One hopes that she has finally gained the power to stand up for herself. To not give too much away, entrusted into the hands of others who cannot possibly bear such responsibility.

33 thoughts on “The Woman Upstairs by Claire Messud”