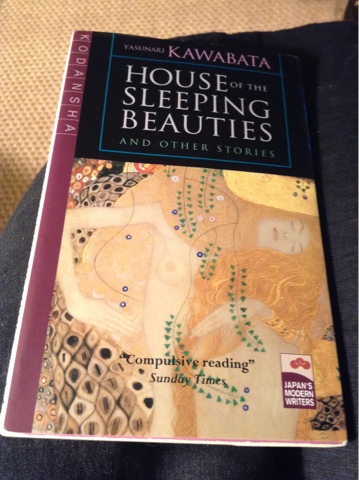 “For Eguchi when he came to this house, there was nothing more beautiful than a young face in dreamless sleep. Might it be called the sweetest consolation to be found in this world? No woman, however beautiful, could conceal her age when she was asleep. And even when a woman was not beautiful, she was at her best asleep.” (p. 64)

It’s a strange little book, this collection by Kawabata. The first story, House of Sleeping Beauties, tells of an old man named Eguchi going to a house that he has been told of where he can sleep, quite literally, next to young Japanese women. They are so drugged that they do not waken, even when he grasps their arms, or shoulders, or pulls their hips closer to his for warmth. He does not have sex with them, but he does curl up beside them and then lapse into his memory of involvement with other women in his younger days.
What is Kawabata telling us in this story? Obviously there are themes between youth and aging. Confession and repentance. Gloom and loneliness. There is also something quite bizarre about a man being drawn to an evening spent with a woman who speaks, or moves, not at all.
Yukio Mishima calls this work, “An esoteric masterpiece.” Certainly it is to be understood by a select few, of which I do not necessarily consider myself a part. And yet I languor in his descriptions of the sleeping beauties, recalling a time when I, too, slept soundlessly, heeding the call of age not at all.
I read this piece for the Japanese Literature Challenge 7, for which July’s theme was the short story.

8 thoughts on “House of the Sleeping Beauties by Yasunari Kawabata”