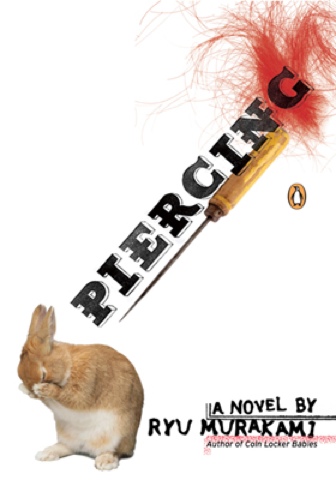 “Thanks to the imagination, there’s no end to things in this world that can trigger anxiety. Normally, of course, you can free yourself from fears like that just by facing them, or telling someone about them.

Piercing, by Ryu Murakami, is not an easy book to read. Compelling, yes, in the way that one observes something horrific and is unable to look away until the resolution is determined. But, easy? No.
There is incredible tension throughout the novel while waiting to see if Kawashima Masayuki will in fact stab a prostitute with an ice pick. He is trying to alleviate the pain in his childhood caused by his mother’s abuse. He is trying to dispel the unbidden thought that he may stab his lovely baby daughter if he doesn’t stab a stranger.
Little does he know that the woman who has come to his hotel room has deep emotional pain of her own. Her father abused her, and when what she calls the Nightmare descends on her, the only way she can alleviate her pain is by stabbing or cutting her own body.
Grim stuff, right? And yet, in the way which I have found Japanese authors to excel, there is a certain tenderness in this novel. Amidst the gruesome reality these characters endure is a quality of vulnerability which quite endears them to me.
For while the term “piercing” can apply to earrings, or nipple rings, or bodily harm in the form of stabbings, it can also describe the piercing of one’s own heart. And that, as we know, cannot be healed by simply applying some ointment and gauze.

8 thoughts on “Piercing by Ryu Murakami”