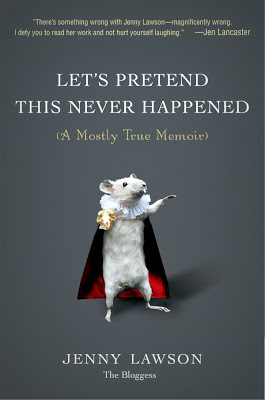 If you take a story filled with misfortune and pain, and scatter it lavishly with the F word, than you have some idea of Jenny Lawson’s book Let’s Pretend This Never Happened. Some people, like Augusten Burroughs and Oprah magazine, call it funny. I call it faintly pathetic. Reading these anecdotes in blog form is entertaining for as long as one is sitting before the screen. Reading them in novel form had me checking to see how many pages were left. One chapter abruptly ends, another begins, where a simple technique called paragraphing would have been sufficient.
I’m not quite sure what it is about misfortune that people seem to think is so funny. What was funny, to me, were the tales of the bizarre and quirky, such as having a taxidermist for a father who left carcasses which would somehow become playthings. Or, the quick turn of a phrase such as referring to her grandfather’s driving at 30 miles under the speed limit as “when snails attack“.
I think the appeal of this book lies in a certain irreverence for the mundane, as well as a brutally honest way of relaying personal stories. In a way, it’s comforting to read of someone’s life with a sense of relief that you’re not the only one who has had extraordinary experiences. You’re not the only one who has suffered a little bit at the hands of fate.

My friend Les wrote in response to an earlier post that Let’s Pretend This Never Happened has been a top seller in the Barnes and Noble store in which she works, and that “everyone seems to say it is the most hilarious memoir they’ve ever read.” Undoubtedly that’s true as the book was on the NY Times best seller list the first week it came out and was a goodreads choice winner for 2012. Just because I normally stand apart from the crowd doesn’t mean that you won’t love it.