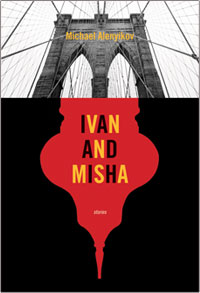 They lay quiet, looking up at the sky. “Which do you think is bigger,” Misha asked, “the Grand Canyon or the Milky Way?”

“Wrong question, Mishka. The point is not how big they are, it’s how small we are.”

“But together, you and me,” Misha had said, “we’re as big and grand as this canyon and all the stars put together.”

What a tender book this is. I’m not Russian, I’m not a twin, I’m not especially close to my brother, and I’m not homosexual. But Michael Alenyikov writes with such compassion and eloquence, that these two brothers and their father became instantly endearing to me. Through a series of separate-but-connected chapters we read of their lives; the way their father has brought them to America, sparing them the full story of their mother’s death, but fulfilling his promise to them. Now he is fragile, even dying, but he loves his sons and on this they can rely.

Ivan is manic depressive. When he’s “up” he’s in a frantic state, once not sleeping for nine days in a row, driving his taxis around New York, talking with his fares, calling his brother with hare-brained schemes or consolations depending on his mood.

Misha is the steadier one, in my opinion, of these twins. The bond between them is flawed but unbreakable. He will set aside everything when Ivan calls, ready to be there for Ivan’s needs which in many ways answer his own.

Ivan and Misha is a powerful look at America. At homosexuality. At family. It reads with a lyricism I would have thought impossible given such emotionally laden themes. It touched me quite deeply, especially when Alenyikov wrote of their father, or the way I felt that neither Russia nor America was their home.

Aren’t many of us ‘strangers in this land’?

22 thoughts on “Ivan and Misha”