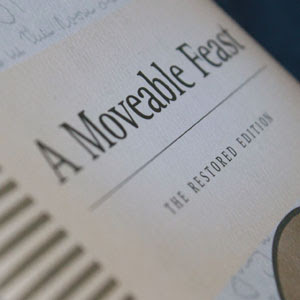 I never cared much for Fitzgerald’s The Great Gatsby, but I loved Flappers and Philosophers. I never cared much for Hemingway’s A Farewell to Arms, but I loved A Moveable Feast. How fitting it is to have read these two authors almost back to back this summer, as Hemingway’s book enlightens some of Fitzgerald’s lifestyle to us readers. Only three years separated them, Hemingway being the youngest, and in my opinion Fitzgerald’s short stories are incomparable to almost anyone else’s from the Western world. But, Hemingway writes with a simpleness which creates a false illusion that it’s easy. As though anyone could write a memoir of what it was like to be young and struggling and living in Paris in the 1920’s.
Hemingway shares his tips on writing: “When I was writing, it was necessary for me to read after I had written. If you kept thinking about it, you would lose the thing that you were writing before you could go on with it the next day. It was necessary to get exercise, to be tired in the body, and it was very good to make love with whom you loved. That was better than anything. But afterwards, when you were empty, it was necessary to read in order not to think or worry about your work until you could do it again. I had learned already never to empty the well of my writing, but always to stop when there was still something there in the deep part of the well, and let it refill at night from the springs that fed it.”
He speaks of  what he read then, which always makes me want to read those very same books myself: “I started with Turgenev and took the two volumes of A Sportsman’s Sketches and early book of D.H. Lawrence, I think it was Sons and Lovers, and Sylvia told me to take more books if I wanted. I chose the Constance Garnett edition of War and Peace, and The Gambler and Other Stories by Dostoevsky.”
I loved the opening of “A False Spring” which commented more on people than season, “When spring came, even the false spring, there were no problems except where to be happiest. The only thing that could spoil a day was people and if you could keep from making engagements, each day had no limits. People were always the limiters of happiness except for the very few that were as good as spring itself.”
Here’s the insight on F. Scott Fitzgerald which spoke volumes to me about skill: “His talent was as natural as the pattern that was made by the dust on a butterfly’s wings. At one time he understood it no more than the butterfly did and he did not know when it was brushed or marred. Later he became conscious of his damaged wings and of their construction and he learned to think and could not fly any more because the love of flight was gone and he could only remember when it had been effortless.”
But the saddest part of all is how he wrote of the infiltration of the rich, which led to such woundedness in his marriage: “Before these rich had come we had already been infiltrated by another rich using the oldest trick there is. It is that an unmarried young woman becomes the temporary best friend of another young woman who is married, goes to live with the husband and wife and then unknowingly, innocently and unrelentingly sets out to marry the husband. When the husband is a  writer and doing difficult work so that he is occupied much of the time and is not a good companion or partner to his wife for a big part of the day, the arrangement has advantages until you know how it works out. The husband has two attractive girls around when he has finished work. One is new and strange and if he has bad luck he gets to love them both.”

Hemingway had a very different life, and made very different choices, than I have. Perhaps this is precisely one of the reasons we love to read: the author’s perspective sheds new light on our own. Our own lives are confirmed, or regretted, or stretched. Yet how wonderful it would have been to live in Paris, to have known the 20’s, and even Hemingway himself.

But Paris was a very old city and we were young and nothing was simple there, not even poverty, nor sudden money, nor the moonlight, nor right and wrong, nor the breathing of someone who lay beside you in the moonlight.

I read this book with Tracey of A Book Sanctuary. Others have said they’d like to join in; when I find their posts I’ll link to them here. This is also a wonderful read for Tamara and Bookbath’s Paris in July II Challenge. Read Audrey’s thoughts at Books as Food here.

21 thoughts on “A Moveable Feast by Ernest Hemingway”