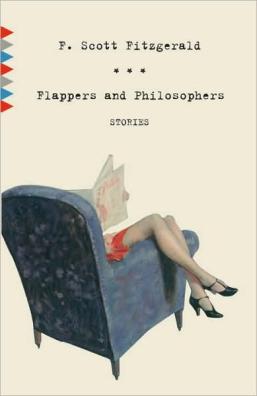 I cannot even tell you how much I love these stories. Never one to be overwhelmed with The Great Gatsby, I am now truly impressed by Fitzgerald’s skill in these stories. Each one is written so beautifully, and the endings, more often than not, pack a serious punch. This is a fabulous collection of brilliant short stories. I’ll put my favorite quotes from each chapter under the titles below, but you’ll have to read the entire story for the full effect of their power:

“Does every man you meet tell you he loves you?”

“Why shouldn’t he? All life is just a progression toward, and then a recession from, one phrase—‘I love you.’ “

“With a furious, despairing energy she rose again and started blindly down the darkness. She must get out. She might be lost in here for days, freeze to death and lie embedded in the ice like corpses she had read of, kept perfectly preserved until the melting of a glacier, Harry probably thought she had left with the others–he had gone by now; now one would know until late next day. She reached pitifully for the wall. Forty inches thick, they had said–forty inches thick!”

“You see, I am fate,” it (the bowl) shouted, “and stronger than your puny plans; and I am how-things-turn-out and I am different from your little dreams, and I am the flight of time and the end of beauty and unfulfilled desire; all the accidents and imperceptions and the little minutes that shape the crucial hours are mine. I am the exception that proves no rules, the limits of your control, the condiment in the dish of life.”

“Vaguely she wondered why she did not cry out that it was all a mistake. It was all she could do to keep from clutching her hair with both hands to protect it from the suddenly hostile world. Yet she did neither. Even the thought of her mother was no deterrent now. This was the test supreme of her sportsmanship; her right to walk unchallenged in the starry heaven of popular girls.”

“You can’t shock a monk. He’s a professional shock-absorber.”

“Happiness was what he wanted-a slowly rising scale of gratifications of the normal appetites-and he had a strong conviction that the materials, if not the inspiration of happiness, could be bought with money.”

“He sailed home on the wings of desperate excitement, quite resolved to fan this spark of romance, no matter how big the blaze or who was burned. At the time he considered that his thoughts were unselfishly of her; in a later perspective he knew that she had meant no more than the white screen in a motion picture; it was just Samuel-blind, desirous.”

Did I do my part to intrigue you? Seriously, these are fantastic stories…

16 thoughts on “Flappers and Philosophers by F. Scott Fizgerald”