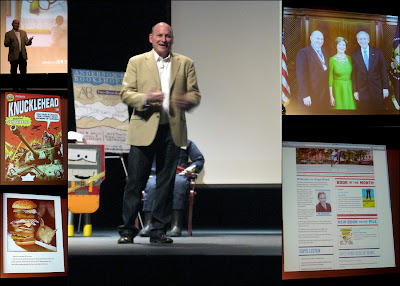 I’ve just returned from listening to Jon Scieszka, America’s first National Ambassador for Young People’s Literature. However, you might know him better as the author of The Stinky Cheese Man.

Or, Knucklehead.  It was, he explained, the term his father called him or his five other brothers, depending on how frustrated he was. And all this time, I thought my good buddy Joe coined the term.

He’s written many other books, including The Time Warp Trio and Spaceheads which is written partly as a book and partly as an interactive media experience.

I loved listening to him talk, while showing slides of his life which I tried to capture above. There’s a picture of him with George and Laura Bush when he won his medal for being the National Ambassador for Young People’s Literature. There’s a photograph of a cheeseburger illustrated by Lane Smith from The Stinky Cheese Man. (“I got so tired of reading my daughter The Gingerbread Man,” he said, “I just sort of snapped.”)

And, there’s a photograph of his website Guys Read. Love this site dedicated to helping boys learn the love of literature.

I would have had a photograph taken of Jon and myself, but I got busted standing in line. My number was 141. Never one to trust in the system, I just stood at the back of the line I found by the door. Until some wicked teacher pulled the ticket out of my book saying, “What number do you have?” Like a nine year old kid in my class, I stood there open-mouthed.

But, I left with what I came for: a great night out and two autographed books. Jon understood. He was once a teacher, too.

13 thoughts on “An Evening With Jon Scieszka”