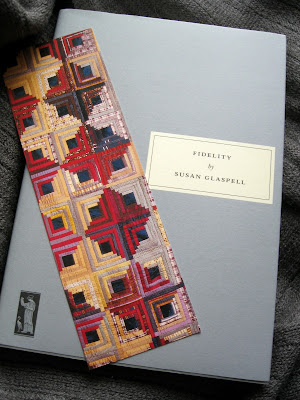 I just closed the cover of Fidelity by Susan Glaspell, a novel I had expected to finish last Sunday for the Persephone Reading Weekend. But, perhaps it is fitting that I didn’t fulfill what I had hoped especially when it comes to discussing this book. Which seems to bring up a lot of questions as to what, exactly, fulfillment means.

Ruth Holland falls in love with Stuart Williams, a very married Stuart Williams, who is not able to put his marriage back together after a previous dalliance. His wife will not forgive him, will not put her arms around him in consolation after he begs for understanding. Shut out from her, he is all the more susceptible to the charm of Ruth. Who likewise is drawn to him.

The story follows several stages through which Ruth progresses: a tumultuous passion which cannot be abated; a brief longing to return to her hometown which quickly dies when she feels the scorn of society; the desire to set herself, and her lover, free when she determines their relationship can grow no farther.

And so Fidelity bears the question, “To whom are we faithful?” To our spouses? To the protocols of society? To our families? To the lover with whom we’ve aligned? Or, to our own selves?

The secular world, of course, has no clear cut answer. That is why Susan Glaspell is able to explore so many aspects of the nature of fidelity in her book. It is easy to see the blooming passion which consumes Ruth in the beginning:

The social life of the town brought her and Stuart Williams together from time to time. They always had several dances together at the parties. It was those dances that made the party for her. If he were not there, the evening was a dead thing. When he was, something came to life in her that made everything different. She would be excited; she had colour; her eyes shone. It made her gay, as an intoxicant may make one gay…After going home she would lie awake for hours, live over every slightest thing he had said, each glance and move. It was an unreal world of a new reality–quickened, heightened, delirious, promising.

But this passion does not protect her against a town whose society will not condone, will not even accept, Ruth or her choice. Listen to Ruth’s best friend’s mother speak to Deane, the only friend who stands by Ruth:

‘Ruth Holland,’ she began very quietly ‘is a human being who selfishly – basely – took her own happiness, leaving misery for others. She outraged society as completely as a woman could outrage it. She was a thief, really,–stealing from the thing that was protecting her, taking all the privileges of a thing she was a traitor to. She was not only what we call a bad woman, she was a hypocrite. More than that she was outrageously unfaithful to her dearest friend – to Edith here who loved and trusted her…I don’t know, Deane, how a woman could do a worse thing than that…If you can’t see that society must close in against a woman like that then all I can say, my dear Deane, is that you don’t see very straight. You jeer about society, but society is nothing more than life as we have arranged it. It is an institution. One living within it must keep the rules of that institution. One who defies it – deceives it – must be shut out from it. So much we are forced to do in self-defence.

And at the very end, when Stuart’s wife faces the fact that her lack of forgiveness has poisoned them all, most especially herself, we find that it is all too late; Stuart and Ruth’s relationship is beyond redemption, but perhaps it is not too late for Ruth herself:

She squeezed his arm in affectionate gratitude for the love in the growling words. ‘Don’t worry about me, Ted,” she implored, ‘be glad with me! I’m alive again! It’s so wonderful to be alive again. There’s the future – a great, beautiful unknown. It is wonderful, Ted,’ she said with insistence, as if she would banish his fears – and her own.

I am left without answers from Susan Glaspell, whom I suspect would advocate following your heart’s desire. Much as I might like to accept that philosophy, I cannot find it holds a promise of any lasting joy. I am responsible for my own happiness, certainly, but once I have made the decision to be someone’s wife, to be someone’s mother, my life is no longer about what I need to do to fulfill myself. My responsibilities have become much broader, my choices much narrower. Ultimately, what I want has very little bearing on the matter.

Interestingly enough, however, Ruth finds that love has left her richer…it was all worth the experience, and so with renewed faith and courage she moves on.

16 thoughts on “Fidelity by Susan Glaspell”