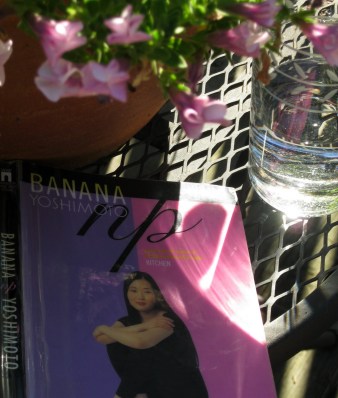 He still seemed slightly embarrassed about his late-night visit. I felt strange. N.P. is just a book, for heaven’s sake. Even if you become obsessed with the book, eventually you should be able to chase it out of your mind, unless you’re tragically flawed.

But what was the deal with these people? Take Sui, for excample. At first she seems real to me, as she talks, shakes her hair off her face, smiles with her full lips, spills food, has gooey nosebleeds. She reacts to what I say in real time. But then reality starts to creep away, and everything goes fuzzy, and it feels unreal to me. It’s been that way since I met her. She is N.P. (p. 88)

What’s N.P.? Literally, the initials stand for North Point. But, it’s a collection of short stories written by Sarao Takase, a very unhappy Japanese writer. For some reason, when the ninety-eighth story is translated from Japanese to English, the translator commits suicide. Takase himself took his life, leaving behind a wife and two children. It is through the eyes of these two children, their older half sister, Sui, and the narrator, Kazami, that Banana Yoshimoto touches on themes of lesbians, religion, writing, friendship, family, and to me, growing up.

All three of them smelled strongly of their pasts, when life was vital and rich. For me, being with people like this seemed like being in a flower garden that is subtly out of sync with reality. I felt that strongly. This time in my life was splendid, beautiful. But there was a limit. It couldn’t last forever. I would open my eyes and wonder why I was still there with them. (p. 135)

It reminds me of my youth, when everything seemed new and exciting. When summers shone brighter than any other season, and the idea that there was nothing I couldn’t do felt impossible.

8 thoughts on “N.P. by Banana Yoshimoto”