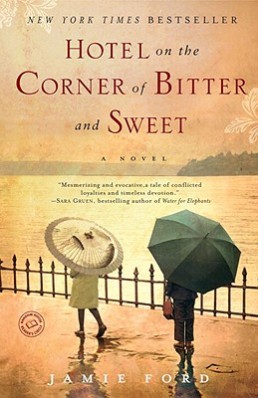 Henry is a Chinese boy living in Seattle, whose father makes him wear a button that says, “I am Chinese.” His father has worked hard to see that Henry can go to the elementary school, but he doesn’t really belong. Neither does the lovely Japanese girl, Keiko, with whom he develops an instant friendship. More than that, really, they have a deep bond which resides in Henry’s heart.

When Keiko’s family must go with the other Japanese families living in Uwajimaya to Camp Harmony, Henry goes to serve food with the school’s cook, Mrs. Beatty, just so he can see Keiko through the barbed wire fence. He brings a sketchbook for her birthday, and a rare and valued jazz record of Oscar Holden playing “Allie Cat Strut.” It will be as if he is there listening with her, she tells him, and I’m reminded of how lovers who cannot be together grasp the smallest things through which to connect.

This is an intricate tale of exquisite beauty; it tells of the Panama Hotel, World War II, Japanese and Chinese, fathers and sons, but more than anything, of Henry’s undying love for Keiko. It is a novel I won’t forget.

26 thoughts on “Hotel On The Corner of Bitter and Sweet”