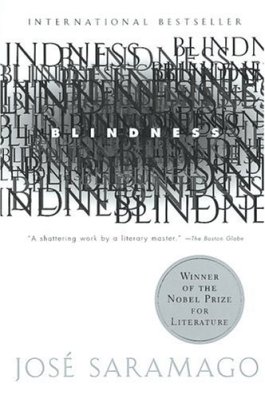 There are no names of characters here. Only “the girl with the dark sunglasses,” or “the doctor”, or “the boy with the squint.”

There are no quotation marks delineating conversations here. Only a random, stream-of-consciousness kind of dialogue as one voice interacts with another.

What there is is blindness. Unexpected blindness which comes upon its victims in the form of a milky white sea instead of total blackness.

While driving home one day, a man sits in his car at the intersection unable to proceed because he has lost his sight. A stranger helps this man to his apartment, and then goes back to steal his car. The stranger becomes blind. The eye doctor from whom the man seeks medical assistance becomes blind. The patients who were waiting in the doctor’s office when the man is called become blind. Blindness seems to rub off from one to another as easily as the hair from a cat when it rubs against you.

How does one function when one has suddenly lost sight? How do those around react when an ailment is suspected of being contagious? It’s rather a survival of the fittest here, except for the doctor’s wife, who inexplicably is not without her sight. Yet she has willingly accompanied her husband with the other blind people into the wards of the empty asylum where they are interned.

A sort of order begins in the wards. People organize themselves so that the distribution of food which they are given, never enough to go around, is at least given equally. But, how are they to manage cleanliness? Believing that they are unseen, not knowing that the doctor’s wife still has her sight, some defecate on the floor; soon filth prevails. Worse, a kind of mafia has set itself up demanding payment for the food which the government promised would be provided.

The soldiers guarding the place are paranoid that the blindness will spread to them, and when the inmates come for assistance they are instantly shot. This book, more than a treatise on being blind, is a treatise on civilization. It is fantastic.

19 thoughts on “Blindness by Jose Saramago”